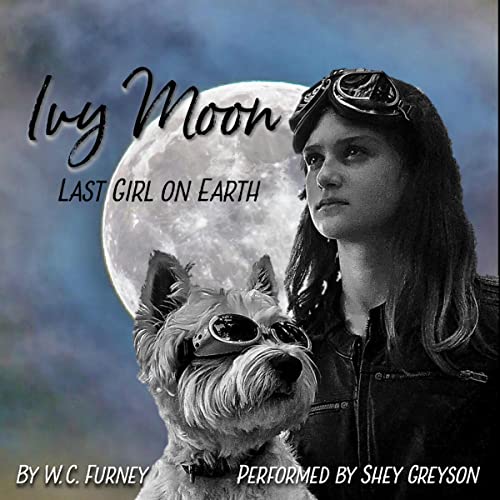 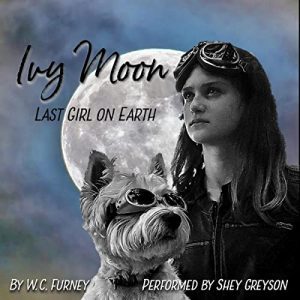 If a girl cries of loneliness and there’s no one alive to hear…can she still survive?

Listeners who love post-apocalypse stories will appreciate the unique perspective author W.C. Furney brings to the genre. Ivy Moon: Last Girl on Earth is a young adult, post-apocalyptic tale of a girl’s survival and self-discovery.

The story begins when the young teen who suffers a head injury emerges from a sailboat that ran aground during a hurricane. The trauma of discovering she is amnesic is soon dwarfed by the realization she is totally alone. Gradually, her expectation that people will return to the community they evacuated is replaced with the startling truth that everyone is gone. Vanished from the face of the Earth.

Hindered by a selective memory that affords only brief glimpses of her past, Ivy and her new friend Tonka—a West Highland White Terrier—set off on a quest to find other people. She soon discovers that surviving a post-apocalyptic world isn’t the adventure books and movies make it out to be.

“This is not the way it’s supposed to be,” I whisper. “In the books and movies, the survivor of an apocalypse becomes a hero…rises above all obstacles, finds other people, and begins to rebuild. No matter how horrible their existence has become, the people in those stories have reason to live. To survive. If nothing else, there are other people in these imagined worlds, either friends or foes or both. I have everything I need to survive, to live out the rest of my life in comfort. But what’s the point of having a life if there’s no one to share it with? I don’t even have an adversary to torment me. Nothing. This is no apocalypse. This is hell on earth…and I am the true walking dead.”

Ivy Moon: Last Girl on Earth is the first of a two-part series.

After a heavy storm, Ivy Moon wakes up to a world without people. The only living being is a dog at the house she has arrived by boat. Ivy Moon doesn’t know where she is, or even her real name. She has lost her memory and needs to find a way to keep living and search for survivors.

This was an intriguing post-apocalyptic novel. Ivy is a relatable teen, likable and resourceful. She feels terribly lonely and scared, but Tonka the dog helps to keep her grounded. She relates all her hypotheses and ideas to him, and all the while, he is her loyal and tireless companion.

This isn’t the first time that an author has written about a girl in her teens waking up alone to a post-apocalyptic world, but the similitude with other books ends up there. Ivy Moon is not just a story about superation and survival, but also about mystery and intrigue. Ivy finds, in this new world, patterns and facts that she needs to decipher. More and more, it seems that the fact that she survived wasn’t accidental. At all. Post-apocalyptic stories are usually about the present and the future. Are the main characters going to survive and how? Ivy Moon’s story is different. it’s a riddle about the past and about who she really is. And finding those clues is her sole responsibility.

I found the pace of the story a bit irregular though. While the build-up was a bit slow, the ending seemed to come quickly and with force. The beginning is a collection of several moments in which Ivy meets this new world. She enters several houses in town, finds obstacles, feels defeated, and finally decides to fight and survive. Furney wanted to transmit how desperate and lonely Ivy felt, but also how special and resourceful she was. I think this could have been done quicker, and editing out a couple of scenes. I liked knowing Ivy better, but the pace dragged a bit. The second half of the book is a lot more dynamic, and slowly some pieces of the puzzle are revealed creating great expectations. From this point onwards, I couldn’t stop listening to the book, wanting to know more.

This is the first book in a duology, and it ends on a cliffhanger. The story itself is amazing, and the more information is revealed, the more questions I had in my head. The ending left me astonished and wishing to know more, not only about Ivy’s future, but about Ivy’s past too. I’m absolutely looking forward to the next book in the series.

Shey Greyson delivered a perfect narration, becoming Ivy Moon, and transmitting her raw emotions with excellent interpretation skills. Ivy was already a well-written character but Greyson’s interpretation contributed to bringing the character to life and making it real. Her narration not only didn’t disturb the story but added value to it, helping the listener to connect to Ivy. The audio production was spotless.