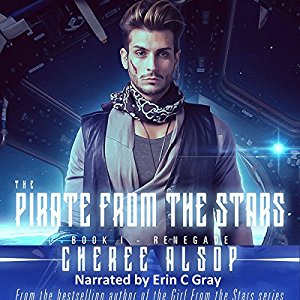 A terrible accident causes Gage to be threatened by his brother. The only way out is becoming a pirate and fight against the Coalition, stealing from them and giving it away to the poor people in need.

I really wanted to like this book. The premises were great, the characters were interesting, and it had an irresistible Firefly vibe. The story is good and the dialogs are fresh and vibrant.

My only issue here was the poor narration, and I confess that I did not want to put myself through six excruciating hours of pain, even though I tried. The characters sounded like drunk valley girls, and the narration in general was done in a tone like Erin C. Gray was smiling all the time. It would have been partly good for the main character, but not for the other ones, and the main narration. And it is like Gray did not even try to have a clear diction… I found it so distracting that I could not, for the life of me, focus on the story.

This is the first time I am not able to finish an audiobook, and it saddens me because this seemed to be such a great book. I think Cheree Alsop should consider having this re-recorded in order to avoid having readers slipping away.