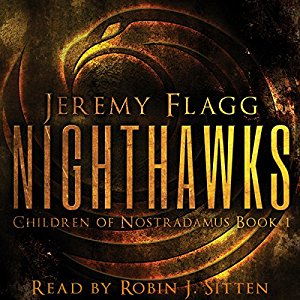 New England is a walled off radioactive prison. People exhibiting extraordinary abilities are hunted for experiments. The only talent twenty-six-year-old Conthan has in life is his art and knack for sarcasm. When a cop threatens his life, Conthan discovers he has the ability to teleport. Hunted by the military and a woman with her own gifts, Conthan finds exiles in the Boston wastelands with powers of their own. For the first time, he sees potential to become a hero. But as he unravels a conspiracy threatening the world, he must decide between his survival and his humanity.

Eleanor Valentine was a psychic to the President of the United States. Feeling something fishy at the White House, Eleanor sends several letters to be delivered in the future to different people. These people will be the called The Children of Nostradamus, with special powers and the capacity of not falling ill. They seek refuge on the dead zone, where no one else can survive. The Paladins, commanded by the President are after them.

I found this book rather intriguing. The events happening at the beginning set the mood for the rest of the novel, and catch the reader’s attention with great ability. It is an action packed novel with great moments and an interesting story. The end left me wanting for more, since although one of the story arcs is complete, it ends on a cliffhanger.

There were quite some characters in the novel, each with their own special abilities. I missed some more character development, more than the cool things each one could do. Due to this I was not able to connect to any of them, excepting maybe Vanessa.

I found some parts a bit confusing, and I found the descriptions of places and actions a bit vague. It was also not very clear to me how the Children of Nostradamus managed to live at the hotel mentioned in the book. They often were at the cafeteria, but there is no mention about resources like food or water.

What was most problematic for me was Robin J. Sitten’s narration. Her diction was clear, and there were no major audio production issues, except for some background noise almost all the time and a couple of random noises throughout the book. Her interpretations were just okay, but what really downgraded the level of this audiobook was her voice range. All voices, including narration, sounded exactly the same. As I have said, her interpretation skills were okay but not wonderful, but the fact that everybody sounded the same was a setback to the experience of listening to this audiobook. I had to pay extra attention to discern which character was talking, and it was easy to get lost many times. This added to the fact that most characters were not very well developed was a problem for me.

All in all it was an enjoyable listen and I am looking forward to listening to how the story continues.