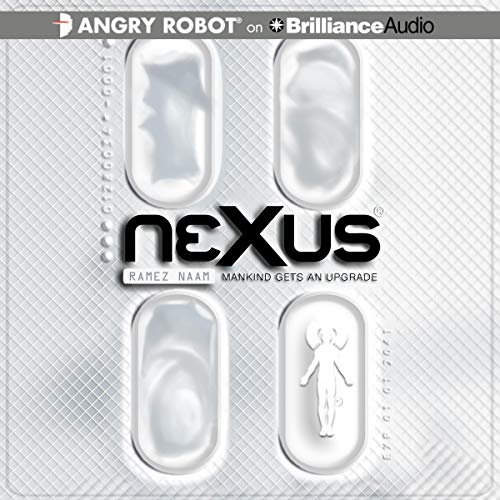 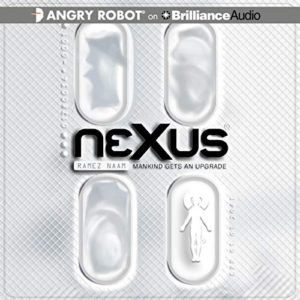 Mankind gets an upgrade
In the near future, the experimental nano-drug Nexus can link humans together, mind to mind. There are some who want to improve it. There are some who want to eradicate it. And there are others who just want to exploit it.
When a young scientist is caught improving Nexus, he’s thrust over his head into a world of danger and international espionage – for there is far more at stake than anyone realizes.
From the halls of academe to the halls of power, from the headquarters of an elite US agency in Washington DC to a secret lab beneath a top university in Shanghai, from the underground parties of San Francisco to the illegal biotech markets of Bangkok, from an international neuroscience conference to a remote monastery in the mountains of Thailand – Nexus is a thrill ride through a future on the brink of explosion.

A young coder works on the next version of Nexus, an illegal drug that enhances humans and allows them to connect to each other. The drug is amply used during clandestine parties, and while our main character defends the good things Nexus could be used to, the government disagrees.

The beginning of this book is pure cyberpunk, and it reminded me a lot of sci-fi classics by William Gibson or Richard Levesque. The premises were exciting, and I got totally on board with the story. The characters were not ultra developed but the story was gripping and full of possibilities.

The first half of the book is quite good but rapidly declines, and the second half is more of a thriller about conspiracies against an evil government, with plenty of action but a lack of content or interesting dialogs. I felt a bit disappointed as, from the first chapters, I expected a different book, and in the end, it was something else. It felt like two different books mashed up together. When I was reading the first half I was sure I was going to continue with the series, and I was celebrating the future hours I was going to spend on it, but after having finished the book, I decided that I won’t be continuing with the rest of the series. I’m not saying it wasn’t a good book, it was just not for me, as I’m more into cyberpunk. People into thrillers about government conspiracies and lots of action will enjoy this one.

Luke Daniels delivered a pretty good narration that went well with the writing style and genre, compelling, direct, and clear. The only setback was that his female voices were a bit forced, but it was, in general, an enjoyable narration. I would definitely listen to other books narrated by Daniels.