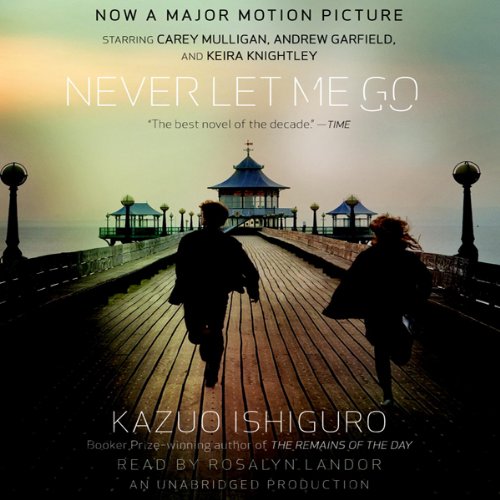 From the Booker Prize-winning author of The Remains of the Day and When We Were Orphans, comes an unforgettable edge-of-your-seat mystery that is at once heartbreakingly tender and morally courageous about what it means to be human.
Hailsham seems like a pleasant English boarding school, far from the influences of the city. Its students are well tended and supported, trained in art and literature, and become just the sort of people the world wants them to be. But, curiously, they are taught nothing of the outside world and are allowed little contact with it.
Within the grounds of Hailsham, Kathy grows from schoolgirl to young woman, but it’s only when she and her friends Ruth and Tommy leave the safe grounds of the school (as they always knew they would) that they realize the full truth of what Hailsham is.
Never Let Me Go breaks through the boundaries of the literary novel. It is a gripping mystery, a beautiful love story, and also a scathing critique of human arrogance and a moral examination of how we treat the vulnerable and different in our society. In exploring the themes of memory and the impact of the past, Ishiguro takes on the idea of a possible future to create his most moving and powerful book to date.

Kath, Ruth, and Tommy grow up in Hailsham, a special boarding school. The story is told in first person from Kath’s point of view, and it starts with Kath being an adult and working as a carer. The writing style is quite casual, giving the feeling of being a diary, kind of a confession or interview, and it basically consists of flashbacks telling their story of how they lived their childhood and their growing years, and how they discovered the truth.

I am not going to spoil the beans, as I think one should read it without knowing anything about it. The “truth” is though, slowly revealed, giving veiled, but at the same time, clear clues. It is like a knowledge preset in your subconscious that you do not dare to think of directly. Y believe this is how the children of Hailsham also experienced it, and it explains somehow how easily they accepted their fate, something that I found appalling.

The story is beautifully told, the pace is slow, but this is a book to be savored slowly. It is an incredibly heartbreaking story, with moments that will stay with me forever.

Why am I only giving it four stars instead of 5 then? Well, I see some loopholes in the story. I do not want to reveal anything here, but the whole concept does not seem feasible and it does not even make sense economically. Also, the four “events” in their lives were not very clear to me. Why four and not three or one? Were they following a special order or was it on demand?

I am not sure whether Ishiguro skipped the details on purpose, to avoid being too crude and preserve the lyrical aspect of the story, or to leave it to the reader’s imagination. It was something that I kept wondering almost since the start and I wanted to have had some answers that could have justified it. It could just be that there is no good justification and it is only a mental exercise to write a good story.

Rosalyn Landor’s narration was solid. Not only her interpretation of Kath was sublime, but she also brought all characters to life with unique styles and voices. Landor kept me hooked to the story with a natural pacing. Her narration style matched the text very well. The audio production was neatly done.

This was my first book by Ishiguro, and it will not be the last one.