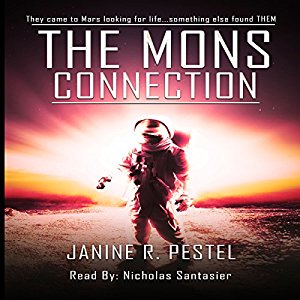 What they found was more than they came for. Jon Carson, the American military man, Doug "Digger" Johnson, The American archaeologist, Kathleen Doolan, the Irish physician and Mikhail Borznekhov, the Russian military man / biologist came to Mars to look for signs of life at Olympus Mons. What brought them there was something found at a dig in Egypt. Follow them as they explore the area around Olympus Mons and then, finally, enter the mountain itself and unlock the hidden, secret mystery of what awaits them. They discovered what Olympus Mons has to do with ancient Earth history...will you?

A team of astronauts is sent to Mars in order to research if there had been once life on Mars. The reason for looking on this planet is an ancient object found in Egypt. The astronauts will find more than what they initially expected.

We get a brief introduction about the characters. I would have liked to know more about them but with a short story the information is always limited. Even like that they were well pictured and I found their personalities clear and distinct enough.

I found this story very entertaining, and somehow it made me think of old Star Trek and Doctor Who episodes. I could see the whole action in my mind, and it felt as cheesy as the mentioned shows. But cheesy in a good way. The impersonation made me think of The Man Trap, the very first Star Trek Episode. The fact that “magically” the air was breathable inside the cave without any kind of airlock also transported me to the 60’s.

I found the story too short and the end a bit rushed. I would have liked it to have been more developed, but all in all, it felt right for an “episode”.

Nicholas Santasier’s narration was correct, without production issues, but I think he needs to work on his accents and performing skills. His diction was clear and the interpretations were good, so that part is covered. I think Santasier would benefit from training his voice to be able to project better.

I would consider this a cheesy science-fiction story, and would totally recommend it to fans of science fiction from the 50’s and 60’s.