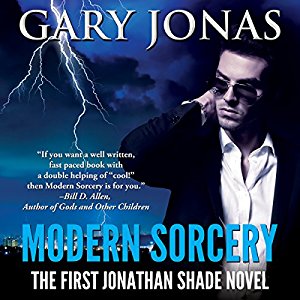 A husband armed with a sword hacks apart his wife in a Denver grocery store. There are dozens of witnesses, and the crime is captured on the security cameras. To the police, it’s an open-and-shut case.

To Naomi, the daughter of the couple, it’s evidence of dark magic. She hires her ex-lover, a private investigator named Jonathan Shade to prove her father is innocent.

Shade specializes in paranormal cases, but he isn’t buying it. Still, he takes the case, hoping to rekindle their relationship. Instead, Shade finds himself mixed up in supernatural intrigue with wizards, magically engineered assassins, and an ancient sorcerer returned to life who’s willing to kill anyone who stands in his way.

Too bad Shade doesn't have any magic.

A husband kills his wife with a sword in a grocery store. The case is apparently clear for the police, but Naomi, the couple’s daughter, goes in search of Jonathan Shade, a private investigator, because she is convinced of her father’s innocence. One of the problems is that Naomi is Jonathan’s ex-fiance, who rejected him five years ago because Jonathan is incapable of doing magic.

This is one of those urban fantasy books that feels fresh amid all the traditional epic fantasy. The characters and their relationships are solidly built, and Jonas has given them a past, making them complex and believable. The story is steadily paced and the dialogs are quite dynamic and sound very natural.

Here we also have to thank Joe Hempel, which gave different personalities to the characters, even though in a couple of occasions there were five characters in the same place. This scene was a bit confusing, but this is a very difficult task for just one narrator. The narration was done in a way that one wanted to know more about the story. Hempel was fully committed to it, and it added to the story and the characters, helping to bring them to life and make a good book into a very good one.

Jonas’ fantasy world is quite interesting, and I will definitely want to know more about it, especially if it is narrated by Joe Hempel.