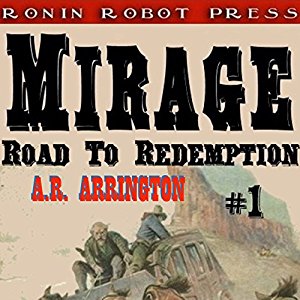 My original Mirage, Colorado (Road to Redemption #1) audiobook review and many others can be found at Audiobook Reviewer.

Moss Partridge awakens in Mirage and realizes that he has lost the last twelve years of his life. He used to be a Union soldier on his way home to Montana, to his wife and son, when something unknown happened to him. After losing his memories for the last twelve years and sobering up, Moss tries to go back home but he gets sidetracked in trying to know who he is and what he has done. During his adventures he will meet two Indian children who will leave a present for him. How are are they related to his past?

This book is one of those little gems that you do not expect. The book is just over two hours and feels like an old western novelette. Arrington has worked well the intrigue to keep the reader watching out for any hints about Moss’ past.

This is just the first book of a series in which I am sure Moss will suffer great changes and will have to repent from something horrible he has done. Will his wife be waiting for him? Could Moss live with what he has done?

The book has plenty of action, but also great depth, as this will be also a journey towards Moss’ soul.

Alex Zonn was the perfect narrator for this story, and he really became Moss Partridge with his husky voice and accent. I have not listened to him narrating other books but his voice was the perfect one for a Western story, interpreting a somehow old ex-soldier and cowboy.

I will definitely want to listen to the rest of the series, and this book would have been perfect if the story would have been longer or we would have gotten more from it. I guess I don’t like cliffhangers.