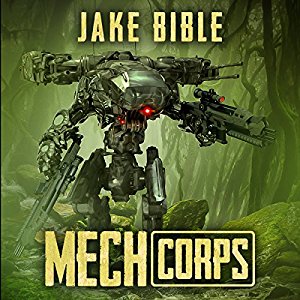 The human race is about to be without a home, Earth having been turned into a toxic wasteland by decades of war and centuries of neglect.

Now united and desperate to put down new roots, humanity sets off across the galaxy. But, the galaxy isn't as hospitable as people would like.

Humanity needs a miracle to survive against the first alien race they encounter. Good thing they have that miracle in the form of a team of 30-foot human-piloted battle robots known as the Mech Corps!

Earth is dying, so the human race is desperate in trying to find another survivable planet. They found the perfect candidate, but this planet is inhabited by a very dangerous race of aliens, and none of the ships sent has succeeded until now. This is why this time they are sending the Jethro and its famous Mech Corps, 30-foot human-piloted robots. Also, the soldiers aboard the Jethro are no regular ones, so they are the last chance to secure this planet.

This is an action packed book with very few moments of respite. I think it would translate very well to the big screen. There are many characters and all interact in a very fluid way, with dialogs which seem natural. The dialogs are the typical in this kind of environment, joking most of the time to downplay the tension during critical moments. I found myself laughing at some of this comments.

Nevertheless the characters are two-dimensional, and this made it difficult for me to connect to them. I think one of the issues was that there were too many characters to be able to keep up with them. They were soldiers on the Jethro, and there was nothing of importance to differentiate them. Bible could swap two of them without me realizing it.

Although the dialogs were natural and fluid, I found the dialog tags too evident, intrusive, and repetitive. Dialogs were accompanied all the time by ‘Roar said, Giga said, …’. I know it is difficult to write a dialog with so many characters, but I think this book would have worked much better with less characters but better developed.

There were two characters though, that were a bit more developed than the rest, but they just appeared at the beginning and at the end of the book. I think the book would have gained if the action on the planet was interrupted by the action on the Jethro and these two characters more often. True that the action with the soldiers was very exciting, but I could not stop myself from wondering how the two women were doing on the ship.

Andrew B. Wehrlen did an excellent job with this book. I think it is extremely difficult to narrate a book with so many characters, especially if there are not many ways to differentiate them. Nevertheless, Wehrlen was able to do that and give distinctive voices to them. He also infused the right spirit in the dialogs, and this contributed to bring the characters to life.