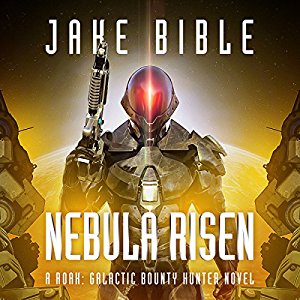 Jonny Nebula was the greatest heavy-grav fighter to ever compete in the Orbs. Galactic Champion for two decades running, no one could touch his skill. Until his final, brutal fight when his reign came to a bloody, deadly end. But, as Roak is about to find out, there's always an encore. An old friend from his past. A job that shouldn't exist. A web of lies and deceit that goes deeper than anyone knows. Roak has his work cut out for him. It'll take all of Roak's skills as the galaxy's premiere bounty hunter to track down a dead man. Especially one that refuses to be found without a knockdown, drag out, to the death (again) fight!

Bounty hunter Roak is forcefully hired to locate and bring Johnny Nebula, one of the greatest heavy-grav fighter, who died during a fight. During his search, Roak will meet an old ‘friend’, who will just increase Roak’s worries.

I really enjoyed Roak’s cheeky personality and his conversations with ‘Hessa’ the special and quirky AI in Roak’s spaceship. I always appreciate when there is good humor in books, and there are quite some funny moments in this one. There is also plenty of action to keep the reader entertained.

This could have been a 5 star book, but I was not completely invested in Roak’s search. I did not feel the urgency of it. I was much more intrigued about Roak’s friend, and the end twist was just superb. Roak’s mission felt kind of an excuse to show us the truth about himself.

From the beginning of the book I had the feeling that the story would have worked better if written in first person. Every time we switched from Roak to the narration I kind of expected to hear it narrated from Roak’s POV.

Andrew B. Wehrlen did a wonderful job in becoming Roak, and delivered a great interpretation, transmitting Roak’s emotions and sounding as cheeky as I am sure Bible intended. Other characters were also well portrayed and the audio production was spotless.

I am looking forward to listening to other books by Bible. I have already listened to Mech Corps, but I have to say that I enjoyed this one more.