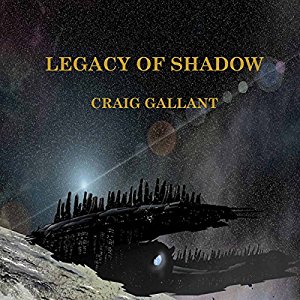 Two men of earth stumble upon an artifact that bestows upon one of them control of and responsibility for an ancient space station that stands as the last bastion of freedom in the galaxy. With the support of his friend and others he meets along the way, he does his best to fill the office until a suitable successor can be found. At the same time forces of galactic oppression move to use his presence as an excuse to crush the station. He battles determined enemies, betrayal, and his own inner demons to defend the position blind luck put him into, but in the process, he might have started a process that might destroy every human in the galaxy.

There is a free city formed by spaceships in a distant and dead solar system. The administrator of this free city, called Penumbra, has a medallions that is a kind of special key that allows him to have special powers over the city and its systems. The current administrator went to Earth for some fun and lost the medallion on a card game, and while giving chase to the winner, the administrator’s bodyguard ended up killing him by accident. Now Marcus, the human who won the medallion must be a temporary administrator of Penumbra. The only problem is that humans are the most hated race on the universe.

There is much more to this story than what initially seems. Behind the events there is a convoluted background story that will remain hidden to the two human characters and the reader, which was a good way to keep the listeners attention until the end. Even though this story did not feel very plausible, it felt very original and out of the box, especially if we compare it with other works of fiction.

I found the story interesting, and the plot well built. There was just something that didn’t allow me to give it 5 stars. Even though the main characters in this book are two humans, I was not able to connect to them. There was a lack of character development, especially about the other races. We are not given much more information than the physical appearance and little more. Some of the dialogs felt forced to me, and this could have also been a reason to having difficulties connecting to the characters. Due to this I didn’t care much about them or what happened to them. Despite this I enjoyed the book, and the original approach to the human race.

Ray Greenley did a good job narrating this book, the characters’ voices were distinct enough in general to be able to follow the story without problems. I think the character’s interpretations could be improved a bit, but in general it was an enjoyable narration. Greenley’s voice is pleasant to the ear and very clear. The audio production was correct.

It was a fine listen, a bit long winded perhaps, but enjoyable and from an original point of view.