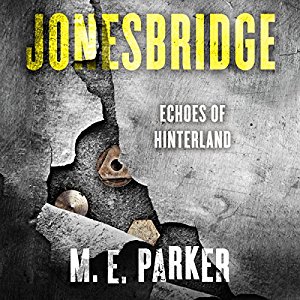 My original Jonesbridge audiobook review and many others can be found at Audiobook Reviewer.

Jonesbridge is in a secret location, a place where the slogs are kept in subhuman conditions, working twelve hour shifts and watched 24 hours a day by the called ghosts. The story is set more than 200 years in the future, after the Zealot War, which started with what looks like an enormous EMP pulse. The slogs in Jonesbridge are instructed to protect the Alliance with their work, and try to salvage spare parts from a dead old world. They are fighting against the Eastern Bloc over the land that could still be worth it and radiation free.

Myron and Sindra are the main characters in this story, two slogs decided to escape their destiny and try to pursue their dreams. Most slogs are captured as children, making this easy to condition them. Myron was hidden by his family until the age of seventeen, which helped him to gain knowledge inaccessible to most slogs.

This is a dystopian / postapocaliptic story from the ones at the bottom of the society’s point of view, the slogs. This is why we are told very little about how the world works, and what were the exact events leading to the current situation. This is mainly a story about poverty, slavery and despair. People enduring inhuman conditions, without the possibility to dream about a different life. They are reminded every day about the importance of their jobs to win the war, but I do not think they even know what the war or the world beyond the war is about.

This is classified as YA, but the events happening in the book could be related to any age, and I did not especially identify Myron or Sindra as teenagers. They were, indeed, but their life was so different to normal teenagers’, so void of dreams, that I would not call this a YA book. The main topic here is survival; and love, if there is a bit of it, does not even play second fiddle. Myron and Sindra are much more busy and worried about other things.

The characters, apart from Myron and Sindra, are one-dimensional. It is not that Myron and Sindra are very developed, but at least we know their dreams and motivations. I wished we were shown more about how Jonesbridge worked or how it came to exist. We discover a little bit almost at the end of the book, along with Myron, and I suspect that there will be more in future books.

Joel Richards’ narration was correctly done, very clear and the characters’ voices were different enough. The audio production was spotless.

As a first book of a series, this one has a lot of potential. There is a lot to be developed but I guess Parker is keeping some interesting stuff for future books. I am looking forward to listening to them.