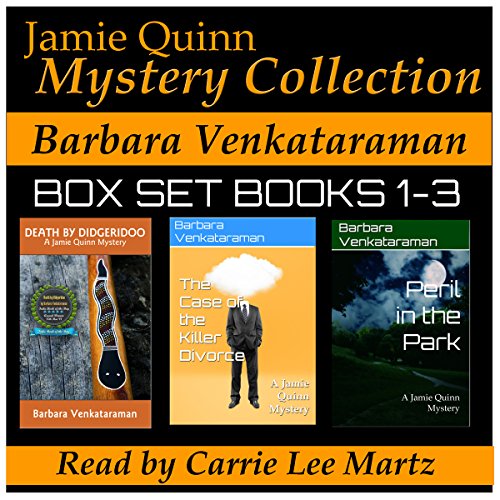 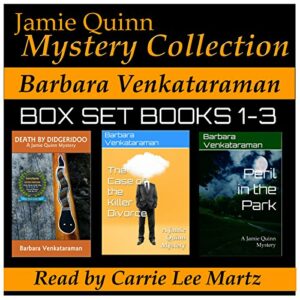 Books 1-3 of the Jamie Quinn Mystery Series, including:

Reluctant lawyer Jamie Quinn is still reeling from the death of her mother. She's pulled into a game of deception, jealousy, and vengeance when her cousin, Adam, is wrongfully accused of murder. It's up to Jamie to find the real murderer before it's too late. It doesn't help that the victim is a former rock star with more enemies than friends, or that Adam confessed to a murder he didn't commit.

The Case of the Killer Divorce

Reluctant lawyer Jamie Quinn has returned to her family law practice after a hiatus due to the death of her mother. It's business as usual until a bitter divorce case turns into a murder investigation, and Jamie's client becomes the prime suspect. When she can't untangle truth from lies, Jamie enlists the help of Duke Broussard, her favorite private investigator, to try to clear her client's name. And she's hoping that, in his spare time, he can help her find her long-lost father.

Peril in the Park

There's big trouble in the park system. Someone is making life difficult for Jamie Quinn's boyfriend, Kip Simons - the new director of Broward County parks. Was it the angry supervisor who was passed over for promotion? The disgruntled employee Kip recently fired? Or someone with a bigger ax to grind? If Jamie can't figure it out soon, she may be looking for a new boyfriend because there's a dead guy in the park and Kip has gone missing! With the help of her favorite P.I., Duke Broussard, Jamie must race the clock to find Kip before it's too late.

This is a collection of three novellas starring Jamie Quinn, a lawyer who recently lost her mother and is still trying to recover. I found the stories quite entertaining, and each one was better than the previous one. The first one, DEATH BY DIDGERIDOO, felt a bit short and rushed towards the end, but it kept my attention nevertheless. The second and third stories, THE CASE OF THE KILLER DIVORCE and PERIL IN THE PARK, felt more polished, with more developed characters and secondary plots. I love a good cozy mystery, and these three stories kept me entertained. It was easy to get into them and to relate to Jamie, a delight for anyone into this kind of books. I also liked to get to know Jamie and see how she evolved.

Carrie Lee Martz’s narration felt kind of insecure at first, although it improved after a while. She did a good job voicing Jamie, but I found Broussard’s speech too slow. Somehow I think I would have enjoyed the book if the narrator was more experienced. The audio production was correct, without issues.