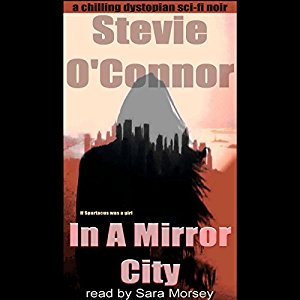 My original In a Mirror City audiobook review and many others can be found at Audiobook Reviewer.

This the story of Maja, a teenage girl, with a much older spirit than her real age, trapped inside the system of a decadent society. We are told about her childhood in the Cage, a kind of refuge camp where poor people and prisoners go, living in the worst possible conditions, surrounded by trash, radioactivity and death. We are also told about the short time she spent in the pleasure house and the time she had to fight in the pits, where men and women have to fight each other to death to the delight of rich spectators. Here is where she will meet Lundrun, her nemesis, and also other people who will be with her almost until the end, to complete a mission, about which she does not have all the details, but for which she is the key.

We are not given much information at the beginning, and some of the details are confusing, but I enjoyed discovering the information while I was listening to the story. I have to say that I really enjoyed this book. Maja is quite a character and one cannot help but admire her. She goes against everything, agains a sick society, against all the odds, but she never gives up. She finds some people along the way which she (and we) does not know if she can trust, because she has a mission, but she does not have all the information. It will be a long way, but only close to the end we will know her goal.

One of the scariest things about this book is that the society depicted on it could be ours in a not so distant future. Human rights being violated, the society collapsing, social classes growing even more apart and things that we deem impossible today becoming possible with the greed of a small group of privileged people. One cannot feel but despair reading about it, but this book also bring us light, and people fighting for a better world, even if that means sacrificing what little they have. I love dystopian stories, and I have read many, but this one has touched me in a special way, because as crazy as this scenario can be, I see the possibility of our world turning into something similar.

Sara Morsey did a beautiful narration and impersonation of Maja, along with the rest of characters. The only negative thing I can say is that the audio edits were a bit too evident, but that did not distract me from the powerful story that Stevie O’Connor has shaped for us.

This is a book I will recommend to everybody. Not only to those who enjoy dystopian stories, since I think we all should think about the direction this society is taking, and how some imaginary stories could become reality one day.