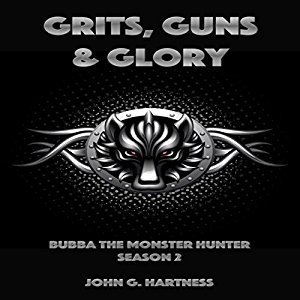 My original Grits, Guns & Glory audiobook review and many others can be found at Audiobook Reviewer.

This is the second series of Bubba the Monster Hunter. It is composed by several short stories and also the conclusion to Family Tradition. The last short story is about how the sword arrived in to the family.

I enjoyed this audiobook, although the stories did not have the freshness of the first series. I found there were less redneck expressions and touches, which was the funny part of the first book. There is a story from the point of view of Skeeter and the last one (about the origins of the sword) is narrated in third person, which breaks the continuity of the book. I expected more development on the relationship between Bubba and Agent Amy, but even though she appears several times in the book, there is not much about them. At the end of book one we get a glimpse into Bubba’s heart, and he felt plainer this time.

We will also know what happened to Bubba’s mother, but I confess that I found that part of the story a bit disappointing. The end of the continuation of Family Tradition was a bit abrupt in my opinion.

For the rest, it is a very entertaining book, but we have to understand that the first series set great expectations.

Something that bothered me a lot, especially at the beginning, was the change of narrator. John Solo did a great job, but I have to say that Andrew McFerrin’s interpretation was superior and his voices were more differentiated. I feel McFerrin was the perfect narrator for this book, so I do not understand this decision. I think book series should be narrated by the same person, if possible, unless there is a special reason to hire a different narrator (e.g. to give a different atmosphere or narrate the story from a different point of view).

I would recommend this book to anyone who enjoyed the first series and wants to know how Family Tradition ends. Bubba and his team are a set of very interesting characters and I think these books can be enjoyed by many people, even if they are not into horror.