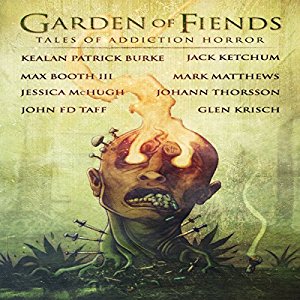 This is an anthology about a different kind of horror. It is not the explicit horror we find sometimes in books, but the real one caused by addiction. Sometimes these monsters can be scarier than the ones in our imagination.

A man and his insatiable thirst for alcohol will push him to do the unthinkable. It is a rather dark story with powerful images.

The One in the Middle by Jessica McHugh

In a near future a new kind of drug is causing havoc in society. This tale was imaginative and complex.

Garden of Fiends by Mark Mathews

This one is longer than the others. Tara is recovering from addiction thanks to her loving family. But her boyfriend is released from prison and things start to go south. She will be tempted, her father’s trust issues will push him to do unforgivable things and her mother will drastically change. A vivid example of how drugs can destroy a family. Sad and tragic, and with well written characters.

This story is a good metaphor for drug use. It has powerful and very clear images about how one can end up if taking this route.

Ted is unable to give up alcohol, so his AA sponsor will offer a miracle bottle that will end this hell forever. The only problem is that Ted’s past will catch up with him.

Torment of the Fallen by Glen Krisch

Maggie is on the run but she is trying to locate her father. She should not have, it was too late.

A man starts bleeding from his penis, and scared of what it might mean, he decides to take refuge in the old good drugs. I really liked this one. It has good images and great characters.

This story is about a ghost who returns with a purpose, he will just have to figure it out.

Some of these stories are quite weird, but the good kind of weird. They will allow us to visit the parallel universe of drug addicts but without the dangers of using. A bit gore sometimes, but well written stories with powerful images that will haunt the listener for some time after finishing the book.

Rick Gregory did a very good job narrating this stories. He transmitted well the characters emotions and his pace and tone kept my attention at all times.