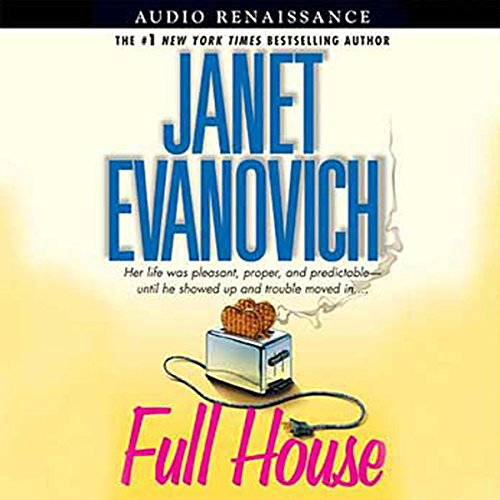 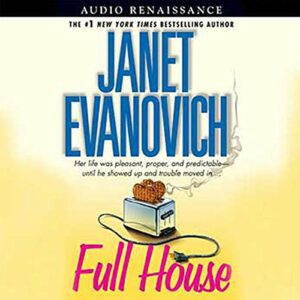 Filled with Evanovich's trademark style and wit, Full House is romantic suspense with a twist...
Her life was pleasant, proper, and predictable-- until he showed up and trouble moved in...
Polo instructor Nicholas Kaharchek senses danger the minute he sees Billie Pearce. She represents everything he's so artfully avoided. Happy in her home life, a divorced mother of two, Billie is the epitome of stability. They have nothing in common.
To his horror, Nick is fascinated-- and irresistibly attracted. When Billie generously offers to share her home with Nick's crazy cousin Deedee for a while, Nick finds himself visiting-- often. And while each is slowly seduced by the other's charms, and both are wildly encouraged by devious Deedee, Billie and Nick find out that what they have in common is most important of all. But neither one knows that danger is lurking where they least expect it and a killer is closing in on them.

I was in need of something light, and usually cozy mysteries get me out of any reading slump. I had already read all cozy mysteries I have so I tried the library and found this, which is the first of a series, and I remember enjoying Stephanie Plum’s novels in my youth.

Well, it was a light read, so light that it was almost insubstantial. This was not a cozy mystery as I expected but a romantic story with a bit of mystery towards the end. I have to say that this book doesn’t have enough nitty-gritty to be considered a cozy mystery, and romance readers may not enjoy the little bit of mystery towards the end, so I have mixed feelings about this one. As I am not into romance novels, this one bored me. I kept listening because I pared it with some weekend chores and wanted to reach the crime part, which I found okay but so late in the story.

The characters are quite cartoonish but one wouldn’t expect much from a book like this. I did expect to find more humor, or at least, things that made me laugh, but this book felt quite flat in almost every aspect.

Lorelei King’s narration was just okay. Her tone was monotone and artificial, but most of the character interpretations were fine… except for Didi, she sounded like she supposed to, I guess. Evanovich described her voice as high-pitched and similar to Betty Boops’s. I just don’t think anyone talks in real life like King’s makes Didi sound.

This is a book I would not recommend. For cozy mystery lovers, it doesn’t have enough mystery, and for people into romance, the mystery towards the end may not be what they enjoy. Only for Janet Evanovich’s fans that could be interested in her early works.