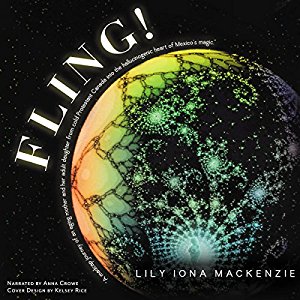 When ninety-year-old Bubbles receives a letter from Mexico City asking her to pick up her mother’s ashes, lost there seventy years earlier and only now surfacing, she hatches a plan. A woman with a mission, Bubbles convinces her hippie daughter Feather to accompany her on the quest. Both women have recently shed husbands and have a secondary agenda: they’d like a little action. And they get it.

Alternating narratives weave together Feather and Bubbles’ odyssey. The two women travel south from Canada to Mexico where Bubbles’ long-dead mother, grandmother, and grandfather turn up, enlivening the narrative with their hilarious antics.

In Mexico, where reality and magic co-exist, Feather gets a new sense of her mother, and Bubbles’ quest for her mother’s ashes—and a new man—increases her zest for life. Unlike most women her age, fun-loving Bubbles takes risks, believing she’s immortal. She doesn’t hold back in any way, eating heartily and lusting after strangers, exulting in her youthful spirit.

Readers will believe they’ve found the fountain of youth themselves in this character. At ninety, Bubbles comes into her own, coming to age, proving it’s never too late to fulfill one’s dreams.

This is the story of Bubbles, a ninety-year-old Scottish living in Canada, who one day receives a letter from Mexico to pick up her mother’s ashes, dead seventy years ago. Bubbles recruits Feather, he daughter, and together the take a trip to Mexico, where incredible things are awaiting them.

This book is full of hilarious and sad moments at once. It shows how two different and strong women have much more in common than they thought. I was quickly hooked to the story, and enjoyed the background stories of both, but after a while it got a bit confusing and the supernatural factor was a bit too much for me. It felt like inspired by ‘100 years of solitude’, but what worked for me in the other one, did not in this.

I had issues finding Bubble’s vitality realistic, but my opinion may just be colored by my poor experience. When ghosts started to appear in the story, I suddenly started having issues connecting to the story and finding the dialogs kind of forced.

After reading great reviews of this book I feel bad because I was not able to get it, but I think part of it was due to the narration. Anna Crowe’s narration was just okay, and definitely not good enough for me. All characters sounded exactly the same, and this made the book quite confusing at times, since we have mother and daughter talking to each other and reliving parts of their past. I think playing with accents would have provided so much added value to the story, but unfortunately, it is not the case. Bubbles is Scottish, and parts of the story are set in Scotland, but the accent keeps being the same from beginning to the end of the book. Adding this to the fact that all characters sounded the same, kind of ruined the book for me. I also found that the character’s interpretations could have been better. They sounded a bit flat and forced. The audio production was correct but I perceived a bit more reverberation than usual, and the the pauses between chapters felt also much shorter than what I am used to.