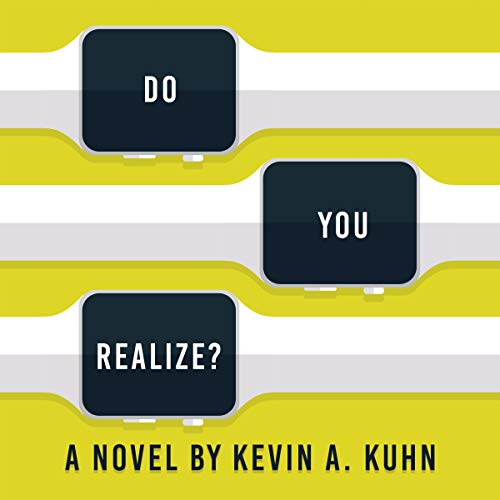 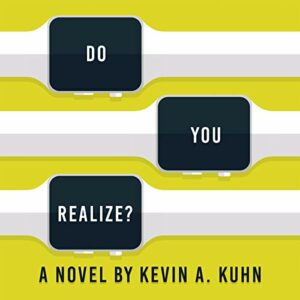 George is a middle-management, middle-class, middle-aged guy who hates his job and struggles to stay connected to his wife and teenage children. Most guys might end up with a steamy affair and a flashy car for their midlife crisis, but George gets a quirky, philosophical physics professor named Shiloh. Trapped with this mysterious misfit on his morning commuter train, George is dragged into awkward conversations about love, fear, music, and the meaning of life. Shiloh asks George to beta-test an app he wrote for the new Apple Watch--and with a free watch included, how could he say no?
When tragedy strikes, throwing George out of his uncomfortable comfort zone, he learns that Shiloh's app lets him journey through alternate versions of his past. As challenges mount in his own reality, George must make a decision that will change him--and possibly the entire multiverse--forever.

George feels trapped in what seems to be a middle life crisis when he meets Shiloh on the train to work. Shiloh makes George a very special present and tries to give him lessons of philosophy and psychology to make him understand that not all is lost, and that everything will be fine.

I really liked the premises of this book, about time travel, even though it was not time travel per-say, and the science fiction part of the book was not bad. I think I just expected it to be a bit more fulfilling, like the philosophy theories Shiloh comes up with to help George, which come out mostly patronizing. It was all about positive thinking and how unimportant our problems really are in the grand scheme of things. It was okay, and I believe this book may be of help to lift one’s spirits, but my problem was that I didn’t care enough for the characters. They traverse quite difficult times, and I think the book should have made me cry a couple of times, but it did not. Somehow there was something missing that did not let me fully enjoy it. Maybe the writing or the fact that the main character is a middle-aged man. Even like that, I believe some of his problems could be akin to me, but I just failed at feeling any kind of connection to him.

Some parts of the book are terribly long-winded, and I think the whole story would have benefitted from an editor. When describing the Apple watch, the author switches from past to present tense, which did not feel right. I also believe the dialogs sounded forced and not natural at all. I think it was one of the main issues why the characters did not seem alive to me.

George is a worrier by nature, and he and the plot feel predictable and flat. The ending was a bit anticlimactic, and the POV switch caught me off guard. Hint: the book is written in first person, but the last chapter is told by Shiloh instead of George. It felt a bit strange, especially because Shiloh keeps being quite a mystery and a one-dimensional character.

Grant Pennington was perfect for George. He did sound like a middle-aged man in need of help, but he did a poor job at trying to interpret the rest of the characters. Everyone sounded exactly the same, and following dialogs was a bit confusing at times. He did not even try with female characters, and pauses between paragraphs were a bit too short, which did not help to follow dialogs.

Aside from the issues I had with the book, I still think it is a good story, and worth reading if you are into time travel.