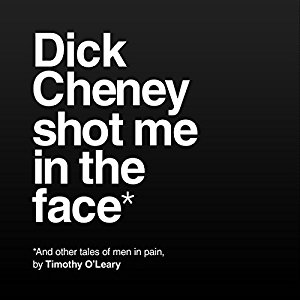 You've probably heard about the man Dick Cheney shot, but what if he wasn't the only one?

Ian Davis is a loner; obsessive compulsive, and a recovering alcoholic. But when a homeless man - who resembles actor Gary Busey - starts harassing him, he resorts to dangerous old habits.

Kenny, a former sitcom star, is a veteran comedian whose career nose-dives after a damaging video goes viral.

In these eighteen stories we also meet: a distraught husband who experiences heartbreak and salvation after a texting teenager changes his life; a man who returns to his hometown to find his first love stacking jars in Costco; a western sheriff who confronts a pedophile, and his own past; and a successful attorney who abandons his career to play the iPad guitar.

Unexpected, humorous, sometimes dark, and surprisingly heartfelt, these award-winning tales explore the secret life of men as they pass into adulthood, middle age, and old age, confronting lust, pain, guilt, bewilderment, and mortality. The collection fearlessly distills for the reader tinctures of joy, pain, madness, heartbreak, greed, and other components of the human capacity for good and evil, for beauty and ugliness. O'Leary showcases humanity in a fluent, fun read, which will let you peek into the most intimate and the well familiar entrails of existence. Few books around these days possess the capability to bring both a tear to your eye and smile to your lips, within the span of a few chapters, such as this work does (less)

This is a collection of eighteen short stories about men finding a difficult situation in life. The subjects are varied, and they go from being shot in the face to finding again the girl who just was a one night stand.

Other feel just like sketches, but they usually had a wow factor at the end which made me think or laugh, depending on the story.

Even though these stories are about men, this book can be also read by woman. I did not feel as an outsider while listening to it, and I enjoyed some of the quirks of these peculiar men.

David Bosco’s narration was very expressive and he delivered different voices for the characters. I found some character’s interpretations a bit overdone, though, but did not prevent me from enjoying the book. I found a couple of small audio production issues: there is a noise on 2:54:35, it sounds like something hitting the mic, or it could just be voice distortion. I also perceived some residual noise at the end of some sentences, probably due to postprocessing and/or noise reduction. In one of the last stories there was a repetitive sound in the background, very low but noticeable.

All in all it was an enjoyable listen, some of the stories were quite powerful. I just wished they lasted longer.