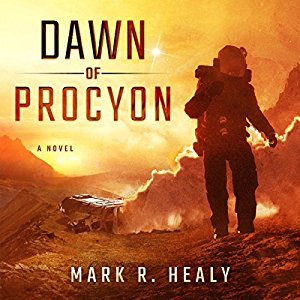 In the midst of an interstellar conflict, mechanic Landry Stanton is shipwrecked on a remote outpost planet, stranded along with a hostile alien that wants him dead.

All Landry wants is to forget the woman he left back on Earth, but now he finds that much bigger issues are at stake: the creature, belonging to a species known as the Argoni, may hold the key to turning the tide in the entire war, assuming Landry can live long enough to tell anyone about it.

Pitched into a life and death struggle against the brutal environment and the Argoni itself, Landry is forced to challenge everything he thought he knew about the war, the aliens and even himself.

Get notified of Dawn of Procyon's official launch and giveaways here: http://www.futurehousepublishing.com/beta-readers-club/

Earth is at war with the Argoni. To avoid being caught by surprise, human have set several outposts in order to detect any Argoni. Escaping from his sorrow, Landry Stanton decides to leave Earth and work on an outpost planet, Proc-One. While being there he is asked by one of the pilots, his only friend, to help him get something out of the compound. To avoid too many questions, Landry’s friend decides to fly under the radar, but before then can land, the ship crashes. Landry will learn that they are in more danger than what they thought.

This was a very satisfactory listen. After a couple of just okay books, I am happy that I have stumbled upon this one. It is one of those that trap me from the start and get ahold of me until the very end. The characters seem real and we are provided with enough background from them. Their stories alternate with the current narrative in a way that they complement each other. The information was given in small doses, making me want to know more about Landry and Kate. Both had flaws, but also very humane reactions. Due to this it was easy to relate to them and get in their shoes.

The parts in which Landry is stranded reminded me a lot of ‘The Martian’, and his conversations with Harry made me chuckle more than once. I really enjoyed this part, wondering how Landry could find a way to survive enough time to be able to find a way to go back to the station.

He discovers part of the biology of the Argoni, unknown until then to men, and I found it quite original. More often than not we are not given a lot of information about aliens in books, and I found Healy’s approach quite interesting and refreshing. It made me think, in a way of the Pequeninos, created by Orson Scott Card.

Travis Baldree delivered a wonderful narration. His voice is clear and he has an ample range to give each character a different personality. It was clear at all times who was talking. He also transmitted well the character’s emotions, and it felt like I was watching a movie instead of listening to an audiobook. It definitely raised the book to a higher level.

I thoroughly enjoyed this book, and it left me hungry for more. I hope ‘Eclipse of Procyon’ gets released soon as an audiobook.