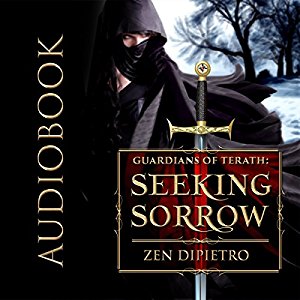 Imagine a world where the main form of energy is called mana, an energy which works in a similar way to electricity, powering vehicles and appliances. Imagine that part of the population has a genetic variation which permits them to control and even transform mana. Terath is this kind of world, where everybody lives in peace because there is no scarce of food nor commodities. But what happens when one day a city is completely destroyed by what seems a great amount of mana? the kind that only somebody with great capabilities of holding mana could accomplish. In trying to avoid a civil war, a small group of people are secretly sent to investigate this and try to find the culprit.

I like fantasy, but very often I avoid it because I have high standards. Many fantasy books do not live to my expectations, but ‘Seeking Sorrow’ is not one of them. The world built by Zen DiPietro is rich, with very well thought principles, a society, and even special words specific to a guild. And there are real badass girls in the story too, which contributes to make the story more interesting.

There is a love story in this book, but I really appreciate that it did not become one of the main topics. I do not need a romantic story, and in some cases I find it distracting from the real topics that should be touched, but when it is done in a very subtle way like here, I think it adds value to the story. I would describe the book as moderately slowly paced, and the romantic parts contribute to this, but it is also one of those books where you get immersed in a different culture, and you need some background that will inevitably slow the story.

Taking account that Terath is a very pacific world, we have been shown an atypic part of it, places where the civilization did not reach. I wonder how cities and normal life were. From what I have listened to, they have ‘modern’ appliances but very rustic (even medieval) weapons, due to the little conflict they find. Taking this into account, I have troubles to imagine how the live is in towns and cities, which level of technology this society has reached. I hope DiPietro elaborates on this subject in future books of the series.

There is a point in this book where everything falls into place and it is easy to know who destroyed Sorrow. I would not say that it was a predictable story, but it would have been better to find it as a surprise.

One of the things that took me longer to get used to was the narration. Nikolai Porter has a clear voice and he makes decent character voices, but the narration was so ‘aseptic’ that sometimes I had the impression that I was listening to a Text to Speech App. I tend to prefer when narrators put their personal touch when narrating, and I had troubles to find that here.

I really enjoyed this book, and I think DiPietro has created an original and interesting world. I hope the rest of the books will be soon available in audible.