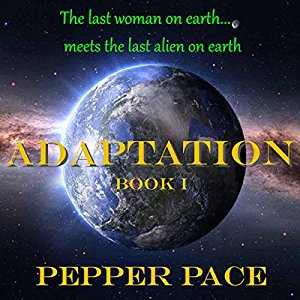 I was offered a copy of this book in audio format by the narrator in exchange for an honest review.

The Centaurians, called ‘blobs’ by the humans, arrived one day in their Mothership with no bad intentions, just sharing, learning and teaching. Their world was destroyed and they were seeking for a place to live. But ten years after their arrival, a deathly virus wiped out eighty percent of the human population. The remaining humans were taken by the Centaurians to a new planet, which they called Earth Two, where they could be surveyed by the Centaurians to try to avoid all the mistakes the humans are prone to.

Carmella is one of the humans that survived the virus, but refused to be taken to Earth Two, distrusting and hating the ‘blobs’, she reclaims her life on her planet, even if she has to make it alone.

The idea of this book was original, and the characters were quite developed. Even though this is considered a science-fiction book, the focus is on the characters, their evolution and their relationships. I enjoyed how natural and complex they felt. I had troubles liking Carmella though, she is bitter, stubborn and distrustful. On the other hand, Bilal is kind, even too much at the beginning of his relationship with Carmella. Nevertheless it is amazing how their relationship evolved, and I am glad I could witness it.

I missed more science-fiction in the book, and I found some of the details vague. When Bilal is talking to his friends in the first half of the book, it is not clear if they are in the Mothership or Earth Two. I guess it was Earth Two, since I don’t think humans had a lot to do in the Mothership, but it seems he can go to Earth and back quite easily. Is Earth Two far? Do the Centaurians have FTL travel? Bilal’s pod is mentioned, but Pace did not explain how they travel to Earth Two, since the Mothership has to stay hovering over Earth. I also found a bit far-fetched the explanation about why it had to stay there, and I found it hard to believe that the Centaurians did not come with another solution to the problem they were trying to solve like this since their science was almost magic (to my eyes).

I am not too keen on romance books, but the one in this book is not too overwhelming, since there is a bigger story at hand, so it felt fine. Be warned that there are several explicit sex scenes which may annoy some. I was okay with it, but in this case some did not add much to the story. And the word ‘penis’ appears many times in the book, so many that I couldn’t help noticing it. I think I would have eliminated some of those mentions and include more variety in the sex scenes.

I really enjoyed Steve Jay Cohen’s narration. It was the perfect for this book and he impersonated both Carmella and Bilal in an impressive way. Listening to him felt like listening to two different people with their motivations and problems. He was energetic when interpreting Carmella, transmitting how powerful her personality was, and very smooth when interpreting Bilal, a lost alien just wanting to win Carmella’s heart.

I would recommend this book to anyone who wishes to listen to a love story with a different twist. No need to be a sci-fi fan to be able to enjoy this one, since the science-fiction is quite loose.

Book three and a half stars, narration five.