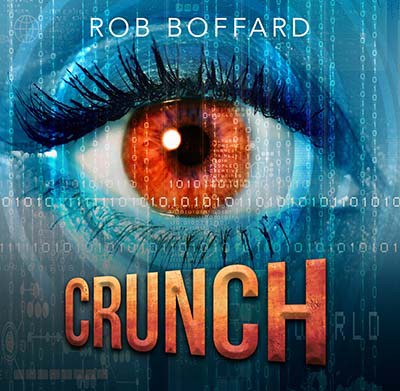 Crush Depth is not like any other games company. Every day, over a single hour, they create a massive, new, multiplayer online game from scratch. That hour is called Crunch, and the company – led by the enigmatic Henry December – has come to dominate the gaming world.

Daniela Swartz is one of Henry’s animators. She’s deeply loyal to Crush Depth, and would do anything for the company. But when she discovers evidence of corporate espionage, Daniela decides to investigate. And she’s about to find out that not everything at Crush Depth is what it appears to be…

My original CRUNCH audiobook review and many others can be found at Audiobook Reviewer.

Daniela works at a large company in Johannesburg as an animator for video games. The Crunch is the time of the day when the company releases a new game, and it requires everybody’s attention and coordination. One day, while smoking hidden in one of the server rooms, Daniela discovers one of the new employees opening a hidden door. She is sure that this new employee is up to no good, but the problem will be to find out what.

I was not sure what to expect from such a short book, but I have to tell you that I simply loved it. Despite being just over one hour and a half, I found the characters very realistic and unique, which is not easy when dealing with short stories.

The book got me hooked from the start, and had me in suspense until the very end. There are a couple of twists that made this story great and simply perfect.

There is a little bit of technical talk in the book but not much to scare anybody. I think this book could be listened by anyone who would like a good and quick story.

Even though I think this story would make a good longer book, I really enjoyed the format. It felt well polished for a short story, the characters were interesting and there was place for a couple of twists without the feeling of missing something. And it was short: almost instant satisfaction.

The book is narrated by Rob Boffard himself. He did a very good job with his book, keeping me interested at all times. He inflicted the right amount of emotion in each character. What I missed was some voice variations for the characters, but the book is written in such a good way that it was always clear who was talking. There is a repeated sentence around 1:29:41, but for the rest there were no other audio production issues.

I really enjoyed this short audiobook, and I am looking forward to other Boffard’s stories. If he is capable of transmitting so well in such a short book, I want to see what he can do with a longer format.

This audiobook is free for download at Rob Boffard’s site.