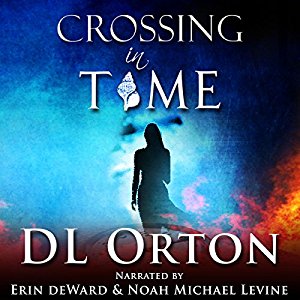 I received a free copy of this book in audio format in exchange for an honest review.

Diego and Isabel meet again after many years apart. She has remarried and gotten divorced, and Diego has never forgotten her. They have an argument about the past and she leaves in a rush. Moments later an explosion shakes the city and runs after Isabel just in case she could be in trouble. And she is. She is trapped inside a building where after the incident a mysterious sphere is found. Upon being opened, it will show that Diego is related to it and its contents, and that he will have the key to time travel.

I got hooked immediately from the beginning of the story. I am a bit tired of reading sappy romance, but this seemed a bit more real, two adults that were trying to start over again despite all the flaws that made the relationship fail the first time. The characters were real, and their conversations were fluid. Then a sci-fi mystery was added and I was sure I was going to enjoy the book. And I did, but just the first two thirds of it. Diego, and especially Isabel, start to make stupid mistakes again, like getting pregnant by accident for the second time. There are a lot more moments where Isabel demonstrates that she has  nothing upstairs but I do not want to give anything away for future readers.

The book had great potential, and the characters were interesting enough. I liked when they start investigating the sphere and connect the dots. But the second half was just too much for me. What I liked from the beginning of the book was suddenly gone here. It was reduced to a mere romantic story between two teenagers (ok, one of them was not a teenager anymore but she behaved like one), sappy, and never ending. The dialogs took forever and just to say nothing. Isabel here could not be more annoying, and I think D.L. Orton missed the point that she was trying to make.

In the end we did not learn about the origin of the sphere. In fact, there is no mention about the sphere towards the end of the book. We had many questions and none were answered. It is like the author is keeping all the gritty stuff for the next book, but after the last third I am not tempted whatsoever to listen to it.

I have something else to point out. The word ‘portego’ does not exist in the Spanish language, and the right word for ‘goalkeeper’ is ‘portero’.

This book was narrated by two people: Noah Michael Levine and Erin deWard. It was a nice touch, but I found the pauses between characters too short and artificial, especially at the beginning. The male narrator did not do voices, and I was confused at times about who was talking. The Spanish accent was realistic enough, but I am not sure about the British. I realized after some time that Matt was British based on the accent. I just did not notice before. Something that could be improved is the reading speed of both narrators. They had different speeds and made more difficult to listen the book to a higher speed than normal, which I usually do.

I wanted to like this book. The premises and characters were great, but it seems the story got lost somewhere in the way, leaving us with a sappy romance that did not answer the questions raised in the beginning.