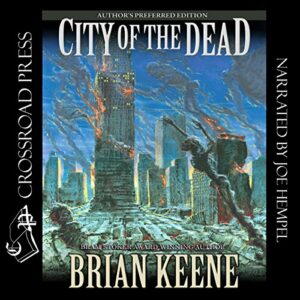 The sequel to one of those most popular zombies of all time!
In this sequel to THE RISING, cities are overrun with legions of the undead, intent on destroying what's left of the living. Trapped inside a fortified skyscraper, a handful of survivors prepare to make their last stand against an unstoppable, merciless enemy. With every hour their chances diminish and their numbers dwindle, while the ranks of the dead continue to rise. Because sooner or later, everything dies. And then it comes back, ready to kill.

Jim and his friends run into some trouble after finding Danny, but they are rescued by a group of survivors who are hiding in a skyscraper under a very rich man’s rule. This new place seems to be safe but Jim and his friends will find out that the enemies are not only the ones outside.

I found this sequel to the Rising a bit more compelling than the previous book as I was familiar with the main characters. It was packed with action and surprises along the way. As I have mentioned in my review of the previous book, the zombies in this story are much different from the ones in other books. They are not mindless corpses, hungry for human brains, but powerful and cunning enemies that are just using the dead bodies to run their own revolution. I am generally not into zombies books but I enjoyed this series.

I liked the mix of characters they find at the skyscraper, it being a heterogeneous group with a lot more to them than what we can see at first. The plot was interesting and the intrigue kept me intrigued at all times. I was a bit baffled about the ending but I will not give anything away.

The best thing about this audiobook was the narration. Joe Hempel always delivered powerful and heartfelt character interpretations that got me invested in the characters and the story. I absolutely love his interpretations of children, they sound pure and sincere. He did a wonderful job with Danny showcasing a great range of emotions from fear to pride, and making them sound real.