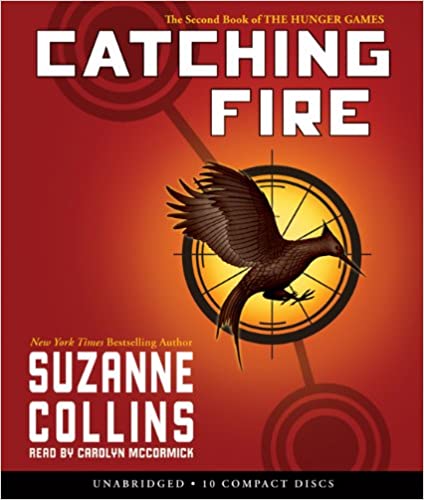 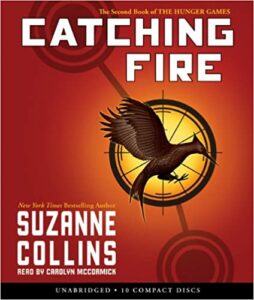 Against all odds, Katniss Everdeen has won the annual Hunger Games with fellow district tribute Peeta Mellark. But it was a victory won by defiance of the Capitol and their harsh rules. Katniss and Peeta should be happy. After all, they have just won for themselves and their families a life of safety and plenty. But there are rumors of rebellion among the subjects, and Katniss and Peeta, to their horror, are the faces of that rebellion. The Capitol is angry. The Capitol wants revenge.
An unabridged recording (11 hours, 41 minutes).

I got hooked to the first book in this series, so I was looking forward to this second book. I did enjoy it but I still think the first book is far superior. The 75th edition of the Hunger Games is going to be celebrated, and this means that the rules will be different than other years. In this special edition, two victors, a male and a female, from each district should take part in the games, and only one can win. This means that no matter what, Katniss will be the female participant from district Twelve.

The Quarter Quell (how this special edition was called) felt a bit like an excuse to try to deliver a more exciting battle to Collins’ readers. The games only take place in the last third of the book. The first two-thirds are a build-up to it, and the rhythm was a bit all over the place for me. It felt slow, and the love triangle was not something I was too interested in. We mostly see Peeta, which is a good guy, while Gale, even though has been Katniss’ companion for years, is not a lot more than a shadow in this book. This made me feel a bit disconnected from him.

I think the intrigue about district Thirteen could have been better built. I remember how fascinated I was while reading Wool, for instance, wanting to know more about the world. Somehow this did not happen as strong here, but on the other hand, Collins’ characters are a lot more developed than Howie’s.

Despite these minor setbacks, I did enjoy the book. We have to acknowledge the fact that this is the middle book in a trilogy. Writing second books is not an easy task, and they seldom hold the same level as first books. I am looking forward to the conclusion of the series.

I listened to Carolyn McCormick’s version, which is the original one but less popular than Tatiana Maslany’s. Again, I think McCormick’s style goes very well with Katniss’ personality, and the rest of the characters are well portrayed too. There were a couple of occasions where dialogs were a bit confusing due to voice inconsistencies, but in general, I think it was quite a good narration.