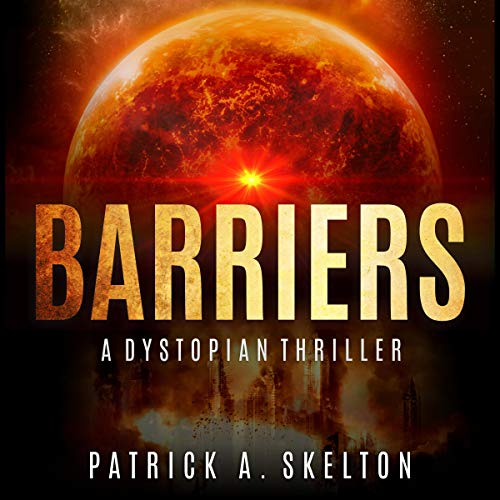 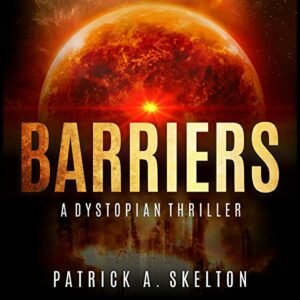 In 2079, Barrier domes shield the planet's wealthiest cities from destructive solar flares, and only the healthy elite are granted protection. That’s bad news for Barrier resident, Nathan Gallagher—his son’s untreatable medical condition has deemed him a non-compliant citizen.
Nathan sets out to rescue his son from a Sanctuary deep in the badlands and becomes entangled in a mission of global magnitude. With only days until another flare is due to strike Earth’s Sanctuary cities, not only does his son’s life rest on his shoulders, but the fate of a quarter billion people.
BARRIERS is a sci-fi thriller set in a dystopian future where a trillionaire tycoon decides who gets protection from the sun…and who doesn’t.

This is the year 2079, and most cities are under a dome to protect their inhabitants from the terrible solar flairs that have been active for the past 40 years. To be able to live in a dome each person needs to demonstrate that they are an active part of society. Nathan and Sarah’s child, Ian, became tetraplegic due to an accident some months before, and as he was adopted, he is cast out of the dome where the family lives and into a sanctuary with precarious living conditions. Nathan asks his father for help, and discovers that there is a conspiracy that goes beyond what they could imagine.

This was an interesting dystopian story with additional elements, and I got sucked in completely from the start. The characters were not fully developed, but the events were interesting enough to keep me engaged. There were several twists and the intrigue was well built up from the beginning. The first two-thirds made this book a page-turner for me. Somehow, I lost interest towards the end. It might have been due too many genres mixed up in this book, and that things seemed less and less plausible. There were minor issues that I felt were stronger towards the end, like the fact that the story has an old fashion feeling, like old pulp novels. I think this is due to the lack of character development and the fact that most characters in the story with more than a couple of lines are male. Women were useful mostly to pack their husband’s suitcases. Dialogues sounded forced, but again, I think this was more patent towards the end, probably to the change in events. There were also a couple of things defying the laws of physics like a transmission from a microphone placed on a person on another planet.

It was an interesting book, and it will definitely delight fans of old sci-fi novels.

The fact that the story grabbed me from the start was a key point for me to stick with the audiobook, as I found several issues with the narration and audio production. The first chapter, especially, has a disturbing beeping noise. I am not sure about the source but it sounded like interferences in the sound equipment. The quality of the recording is not great, but it felt worse at times. There is also a bit more reverberation than what we usually hear in general in audiobooks. The narration was okay, but it was a bit on the monotone side, and although the character’s interpretations were good, they often sounded quite similar, so it was difficult to follow some dialogues. I found the overall narration distracting from the story, but as the premises were interesting, I was able to stick with it.