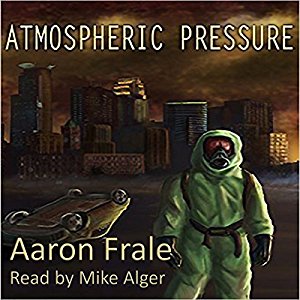 My original Atmospheric Pressure audiobook review and many others can be found at Audiobook Reviewer.

Olson is an eleven year old kid who lives in a sealed city. The world has become so contaminated that the air outside is so poisonous that it can kill in seconds. In Olson’s society people have friends and acquaintances but nothing closer than that. Olson will gain citizenship soon and start working on a job that has already been decided. Everything changes one day when one of Olson’s teachers commits suicide just in front of the kid. Soon after, Olson will meet Natalie, one of the citizens from the top floors, where people have families and know where they came from. Together they will try to find out the truth behind a society which seems quite different for each of them.

This was a very interesting dystopian story, one of those which seem realistic enough to imagine our own society evolving in the same way. This aspect, linked to the search for the truth hooked me to the story from the beginning. The characters are not fully developed, but they are believable enough to make this book quite enjoyable.

Something that was not credible enough for me was how mature Olson and Natalie were despite their short ages. I found also unrealistic the grade of development described for one year old kids. Maybe with their genetic engineering they improved this too. It is not mentioned in the book, but since it is written from Olson’s point of view, I find it difficult to make the comparison between their and our babies.

Aaron Frale repeats several times that the key for this society to work and not to break was that each part of it had just a piece of the puzzle. I agree with this, but there was one of the pieces that I had troubles to swallow. The fact that he repeated the sentence about the pieces of the puzzle at least three times seemed excessive and an attempt to convince the reader about it despite the flaws of those pieces.

Considering these remarks, the book is very well written, and the story is interesting and original, keeping the listener’s attention until the end. Just be prepared for the cliffhanger and some unanswered questions. I would definitely continue with the story if Frale publishes a continuation.

Mike Alger’s narration was quite good, making clear differences between character’s voices and expressing their feelings. The audio production was also correct.