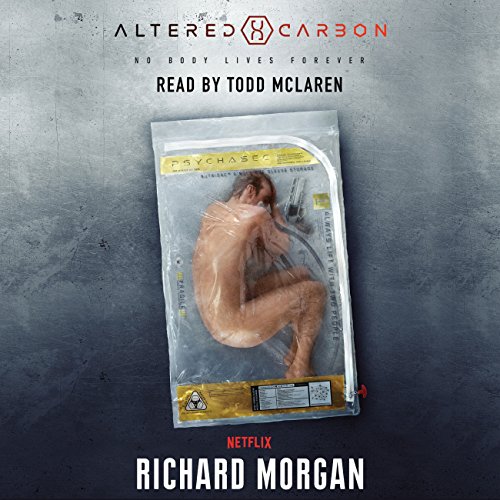 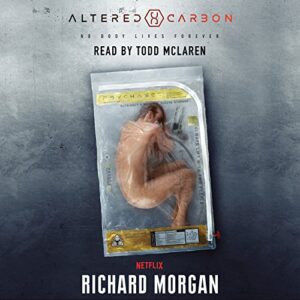 Four hundred years from now mankind is strung out across a region of interstellar space inherited from an ancient civilization discovered on Mars. The colonies are linked together by the occasional sublight colony ship voyages and hyperspatial data-casting. Human consciousness is digitally freighted between the stars and downloaded into bodies as a matter of course.
But some things never change. So when ex-envoy, now-convict Takeshi Kovacs has his consciousness and skills downloaded into the body of a nicotine-addicted ex-thug and presented with a catch-22 offer, he really shouldn't be surprised. Contracted by a billionaire to discover who murdered his last body, Kovacs is drawn into a terrifying conspiracy that stretches across known space and to the very top of society.

This book had been in my TBR pile for several years and the wait generated quite some expectation. I enjoyed the book but I have to say that I expected more. I want to mention that I didn’t watch the show, so this review is just about the audiobook and I won’t mention anything about the TV show.

Men have perfected the technique of storing human conscience in a very small chip of memory, or stack, how it’s called in the book. This allows rich people to skip from body to body and reach the closest thing to immortality. A body is a commodity, which means, that a cheap and effective way to imprison anyone is just removing the stack from the body and storing it for the required time, which also allows making a profit by renting the body itself, and even using other’s bodies.

Takeshi Kovacs is an envoy from another planet. A special agent turned rogue, he has been imprisoned for many years but his sentence was just paused to provide his services to a very rich man on Earth, and maybe gain a pardon if things go well.

What I expected to be a technothriller was in fact a noir cyberpunk tale. It was good, just not exactly what I expected. The book is clearly written for a male public by a male writer with a male main character, with plenty of boring and unplausible sex scenes, and a female nemesis that is tempting and dangerous in equal measure. All this made the story a bit difficult to digest at times and it made it feel a bit outdated.

The world-building was great and I liked the idea of cheap synthetic bodies for the ones that couldn’t recover their own. I could have done with a synthetic myself to avoid allergies and other health ailments, but I digress. At least, if the book made me think about some of the core concepts, it means the world-building was well done.

The story was interesting and complex, and the more I knew about the story, the more intrigued I was. The character development was not as good though, and this might partially be why I liked the book but I didn’t love it. It was difficult to connect to the characters and feel some empathy towards them. I didn’t care much about Kovacs, probably due to how he was written.

Todd McLaren’s narration style went well with the noir atmosphere but it didn’t exactly enhance the story, or at least, helped to hook the listener. I found his narration a bit dull with not so great sound quality. It was okay, but I would have preferred a more polished narration. The character’s voices sounded all quite similar, male and female, except’s Kovacs, who had a different voice.