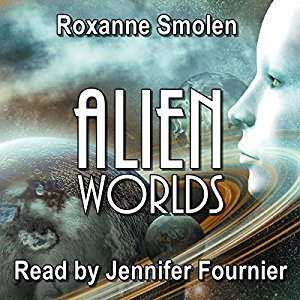 The Colonial Scouts are an elite group of explorers who seek out habitable planets for the Colonial Expansion Board. They travel through space via programmable wormholes.

Impani, a brilliant girl with a dark past, dreams of escaping the streets by becoming a Scout. Because she is homeless, she feels she must study twice as hard to get into the program. On the day before her final exam, however, a transporter malfunction sends her jumping uncontrollably from planet to planet. Although the error could be corrected from inside the wormhole, the Board decides she is too young to understand that level of tech.

Will she prove them wrong? Or will she die on an alien world.

My original Alien Worlds audiobook review and many others can be found at Audiobook Reviewer.

Impani escaped from the streets by being self taught in order to form part of the called colonial scouts. They are children used to explore habitable planets. In one of these explorations, the ring used for transportation gets corrupted and Impani and her partner get stranded on an unknown planet.

I first thought this was intended for young adults, but I think it would work better with young teenagers, since the average age of the characters is sixteen, and most of the time they are more immersed in the drama of younger ages than with the perils at hand.

I found the first  half of the story a bit repetitive but with no evolution. The kids were traveling without control from one planet to the next quite fast. There is nothing of importance happening here apart from some interactions of the two main characters.

The second half is much more entertaining though, since the story starts moving forward, and the interactions among characters are more developed. There is also the resolution to a more important mystery.

If it were not for the first part I would have given four stars to the book. I understand that this book may not be attractive when read by an adult, but I think it could be quite compelling for young teenagers.

Jennifer Fournier’s narration was okay. Her diction was clear and she transmitted the characters emotions, but there were a couple of issues. Her voice range is quite limited, and in many occasions it was difficult to discern who was talking, and I even got confused between narration and dialog. There were also audible breath intakes which distracted me from the story and noticeable audio edits.

I think this audiobook could work well among young teenagers, but in my personal opinion, it would benefit from being edited.