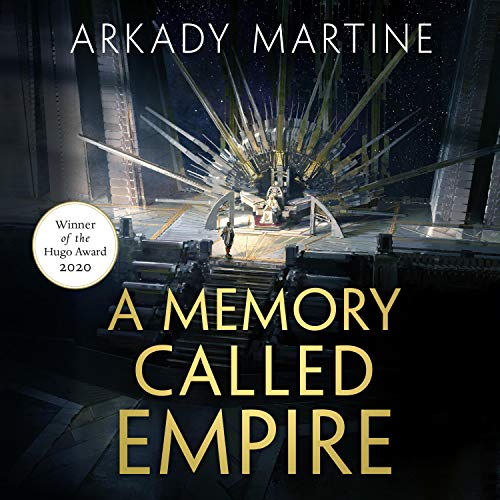 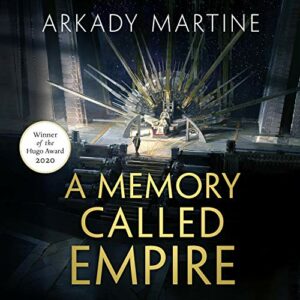 Ambassador Mahit Dzmare arrives in the center of the multi-system Teixcalaanli Empire only to discover that her predecessor, the previous ambassador from their small but fiercely independent mining Station, has died. But no one will admit that his death wasn't an accident—or that Mahit might be next to die, during a time of political instability in the highest echelons of the imperial court.
Now, Mahit must discover who is behind the murder, rescue herself, and save her Station from Teixcalaan's unceasing expansion—all while navigating an alien culture that is all too seductive, engaging in intrigues of her own, and hiding a deadly technological secret—one that might spell the end of her Station and her way of life—or rescue it from annihilation.

A Memory Called Empire is one of the most beautifully written books I have read in a long time. It is the story of Mahit Dzmare and her love for a civilization engulfing her own. Mahit is sent with urgency, and without further explanation, to the heart of the Teixcalaanli Empire as ambassador from Lsel, a small mining station on the outskirts of the Empire. Upon her arrival, Mahit is informed of the tragic death of the previous ambassador from Lsel Station due to an allergic reaction while dining with a powerful public figure. Lsel has a secret technology to guarantee the continuity of important jobs like Mahit’s, consisting of a small device with the memory of previous generations implanted in the brain of the current subject. Mahit will need to use this device to try to do her new job efficiently and to find out whether her predecessor’s death was an unfortunate accident or plain murder. The only problem is that Mahit’s device has an outdated copy of the previous ambassador’s memories, and to add to her problems, it seems to be malfunctioning.

This a story of political intrigues, friendship, espionage, culture clash, and making sacrifices for the greater good. The world-building is absolutely amazing, with plenty of details and nuances. Mahit’s experience felt real and it was quite similar to what one can experience when moving to a different country. The Empire has a different language than Mahit’s mother tongue, but Martine goes beyond this, and describes various nuances in their speech and non-verbal language, how different the clothes are on the Empire, and how Teixcalaanli people construct their names. I loved Tree Seagrass and Twelve Azalea’s interactions, and how Three Seagrass evolved with new events. The characters are well developed and they have small imperfections that make them real and alive. Dialogs feel fresh and natural, and Thre Seagrass and Twelve Azalea’s banter is delightful.

The story is quite convoluted, and there are many political and personal issues at play here. I found the cultural conflicts quite interesting, and the beautiful language was mesmerizing. The rhythm felt off a couple of times, but because there is a greater story arc as this book is part of a series. I wanted to know more about that, as most of the story is focused more on Mahit’s issues navigating the Teixcalaanli society and finding out about her predecessor’s death. There are quite some characters in this book, and their names may sound a bit complicated so writing them down could be helpful to remember the many acquaintances and their importance to the Empire.

Amy Landon delivered a sublime narration, dealing with foreign words and keeping it consistent when interpreting the characters. It was easy to know who was talking as each character had their unique tone and style, not an easy task in a book with so much dialog as this one.

I found this book very satisfying, and I am looking forward to the second in the series, which will be released as an audiobook in 2021.