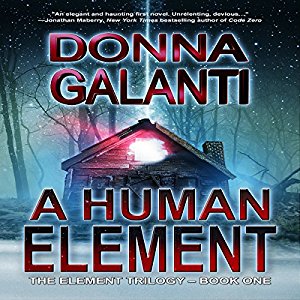 I received this audiobook as part of my participation in a blog tour with Audiobookworm Promotions. The tour is being sponsored by Donna Galanti and Auspicious Apparatus Press. The gifting of this audiobook did not affect my opinion of it.

Laura Armstrong is someone special. She has great healing powers, but that does not prevent her loved ones from being murdered one by one. She has terrible nightmares about somebody who wants to kill her too. Somehow it is all related to a supposed meteorite fallen years ago, when Ben was just a child. Ben is meant to meet Laura to try to fight against this evil.

I rarely judge books by their cover, but in this case its cover was what drew me in. I was not sure what to expect from it, it seemed a paranormal novel, but it was a sci-fi wannabe. The story about the two twins was a good premise, but it failed in its execution.

The characters were just plain and I could not connect to them. Laura was just too perfect, naive and kind to be real, and Ben was broken, and this was a good possibility for good character development, but Galanti just left it as merely drafted. Relationships were forced. I never got Laura’s friendship with Jim, and how her parents accepted this without any questions or concerns. And that Ben and Laura’s relationship was something meant to be… I am sorry but I cannot let that pass. The word Fate was repeated so many times that I could not help rolling my eyes. It could be because I do not believe in fate, and because I do not see how it fits in a serious sci-fi novel. One of the characters could see the future, and he said that he knew some things were going to happen, but about other things could or could not, depending on people’s decisions. This felt ambiguous and it was as if the author was trying to explain something very profound without succeeding at it. Due to these aspects I did not care much for the characters or what happened to them.

At some point I felt I was reading a new version of the Beauty and the Beast, where all things ugly should be bad by popular opinion. And the Beauty is all good, innocence and kindness. It was just too black and white.

There are several explicit sex scenes in the book, that apart from not adding anything to the story, seemed repetitive and unrealistic. A man and a girl, her with little experience, and him with experience just with prostitutes, meet and shortly after have the best sex of their lives climaxing at the same time. Where does this happen? Just in romantic novels, believe me. I like when sex scenes add some value to the book, or they are described in an original way, but none of these two things happen in this book.

Chase Bradley narration was not bad, but also not great. It felt like he was more reading than really interpreting, and all voices sounded the same. His voice is very clear though, and despite feeling the speed a bit slower than average, this is not a real problem since the Audible App allows for speed shift.

It was an okay book but I will not continue the series since I prefer a different kind of science-fiction.