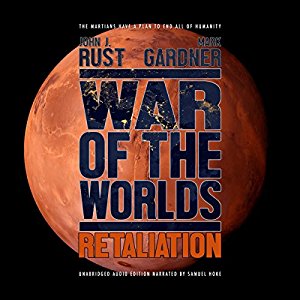 1898: Martian tripods lay waste to Earth’s cities. The world’s armies are unable to stem the tide of destruction. When all hope appears lost, common bacteria kills the alien invaders. From the ashes, the human race uses the technology left behind by the Martians to build new, advanced weapons.

1924: Armed with their own spaceships, tripods, and jet fighters, the nations of the world are ready to take the fight to Mars. George Patton, Erwin Rommel, Charles de Gaulle, and Georgy Zhukov lead their troops in battle across the red planet to end the alien menace once and for all. But the Martians have one last, desperate plan to try, and if successful, it could mean the end for all humanity.

I received this audiobook as part of my participation in a blog tour with Audiobookworm Promotions. The tour is being sponsored by Samuel E. Hoke III. The gifting of this audiobook did not affect my opinion of it.

In 1898 the Martian tripods arrive to Earth destroying everything they find. Luckily after some time common bacteria kills them all, but human will never forget the wave of destruction by the Martians. Twenty six years later, mankind is ready to retaliate, using the technology left behind by the Martians during the invasion.

I read ‘War of the Worlds’ by H.G. Wells (I can’t help it but that makes me think of Warehouse 13) ages ago, I remember I liked it but it felt a bit outdated. Somehow I had a similar feeling with this one too. I had lots of troubles to connect to the characters and I struggled to keep my attention to follow the story. The Martians were referred by almost everybody as ‘squids’, and the lack of depth in Humans and Martians made this book a bit difficult for me.

There are real characters in this story, like Hitler, or Charles de Gaulle. I found it somehow weird for them to be included in a science-fiction story, since I think we can all agree that using that advanced technology to fly to Mars in 1924 seems a bit far fetched.

I think the narration was part of the reason why I did not enjoy the book. Samuel E. Hoke III has a raspy voice and I found his narration quite monotone and with pauses in weird places. He did not make differences for the characters, which made the book a bit difficult to follow at times. He used different accents, but for the rest, the character’s tones and styles sounded the same.About the audio production, the voice sounded very processed, like Hoke tried to remove some noise floor, even though there was still a bit of noise present on the final product.

I think it was an interesting concept, but its execution was not something I enjoyed. Maybe with a different narration the book could have shone a bit more.