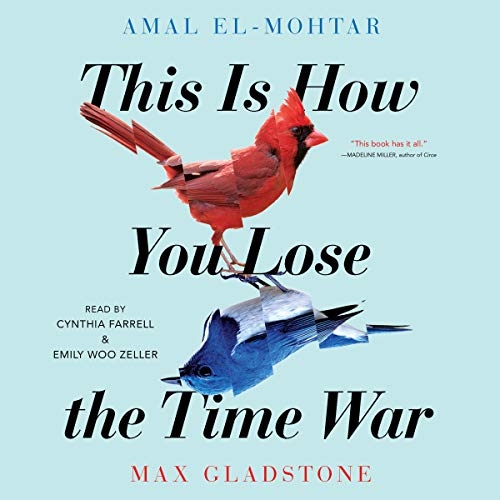 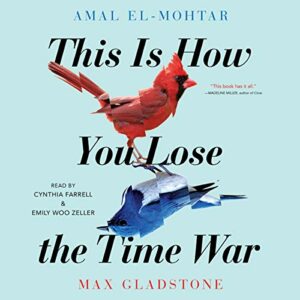 Among the ashes of a dying world, an agent of the Commandant finds a letter. It reads: Burn before reading. Thus begins an unlikely correspondence between two rival agents hellbent on securing the best possible future for their warring factions. Now, what began as a taunt, a battlefield boast, grows into something more. Something epic. Something romantic. Something that could change the past and the future.
Except the discovery of their bond would mean death for each of them. There's still a war going on, after all. And someone has to win that war.

I was so very curious about this novella, which no one was able to categorize into a specific genre, and I am no exception. A mix of time travel, science-fiction, poetry, epistolary, romance, sapphic, cyberpunk, steampunk; the list is long.

This is the story of two agents belonging to different factions in a time war, they are the best in what they do, modifying different threads of the multiverse to shape the world according to their bosses’ interests. Red fights on the Agency side; their people have embraced technology and have incorporated it into their lives. Blue reports to Garden, an entity that believes in ecology and unity as a means for humanity to thrive without forgetting their origins and enjoying the limitations they may have as being part of an ecosystem. Red and Blue exist beyond time, being able to get in and out of a specific strand at will to alter history. These two agents start writing letters to taunt the other, as a way of acknowledging the soldier from the other side, but they end up falling in an impossible, forbidden, and spiraling love.

I confess that I had troubles at first getting into the story. I had to listen to the first 40 minutes twice because this felt so different to any other book I had read before that I had no idea what was happening, and beware, this is not a book to listen to lightly while doing chores. This book needs to be savored slowly to be able to appreciate all nuances in it. I have to say that after it clicked I devoured it in two sittings. It was addictive, a sensory explosion, heavy and light at the same time. I was getting drunk on Red and Blue’s words.

At times it felt like a writing exercise, which is partly what it actually was, but done with sublime and exquisite results. Max wrote Red’s parts, while Amal wrote Blue’s. This was almost entirely done while on a writing retreat. Apart from being exceedingly beautifully written, I also found it very original and imaginative. The letters were almost always embedded in the landscape where the agent was having her current mission.

I am not usually into romance but this was so beautifully and originally done that I could not resist the words, the poetry, the images. Because this is a tantalizing and lush story where love is not about sex or attraction but about the passion of the soul, hunger, and surrender.

There is not much world-building or details about how the world works but we get enough information to have an idea of what surrounds these two characters and what is at stake. For the ones wanting to have all the details, this book may not work, but I personally love suggestions that talk about a broader world. There is a TV show planned based on the book, so I wonder how they are going to fill in the gaps that Max and Amal have left to our imagination.

After I finished the book I wanted to recommend it to everybody, but I know that it might not be for everyone. I think you need a special kind of sensitivity and be open to different things to be able to enjoy this wonder, which may have not worked in a different strand of time and space, but did in ours. A book to read more than once to savor the different layers in the story.

Cynthia Farrell and Emily Woo Zeller delivered impressive performances of these two strong women, bringing them to life. Their narrations were passionate and well-paced. It was like listening to the real characters reading the letters directly to you. I believe this book is best experienced in audio.

If you have enjoyed this book, you may want to teak a peek at this interview with Amal El-Mohtar and Max Gladstone about the writing process of this book.