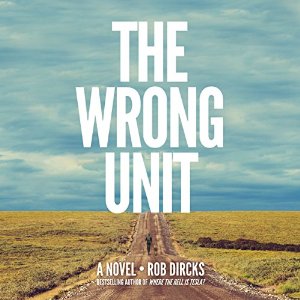 I don't know what the humans are so cranky about. Their enclosures are large, they ingest over 1,000 calories per day, and they're allowed to mate. Plus, they have me. An Autonomous Servile Unit, housed in a mobile/bipedal chassis. I do my job well: keep the humans healthy and happy. "Hey you." Heyoo. That's my name, I suppose. It's easier for the humans to remember than 413s98-itr8. I guess I've gotten used to it.

Rob Dircks, best-selling author of Where the Hell is Tesla?, has a "unit" with a problem: how to deliver his package, out in the middle of nowhere, with nothing to guide him. Oh, and with the fate of humanity hanging in the balance. It's a science fiction tale of technology gone haywire, unlikely heroes, and the nature of humanity. (Woah. That last part sounds deep. Don't worry, it's not.)

I was offered a free copy of this book in audio format from the author and narrator in exchange for an honest review.

The few humans still alive dwell in the little place of Sanctuary, under the rule and organization of the Core, with robots as assistants and peacekeepers. Heyoo, or unit 413s98-itr8, is in the repair bay to solve an issue with his program, when some humans suddenly irrupt there and give him a mysterious package just before teletransporting him to an unknown location. There is just a problem, and it is that the humans got the wrong unit. The future of mankind will depend on Heyoo and his special package.

I can say with no doubts that this has been one of the best and most endearing books I have listened to this year. Units like Heyoo are allowed to live just 15 years, to prevent them from evolving and caring, which is what happens to Heyoo in this story. He starts the journey completely lost and without understanding much, but he will live to witness great changes, to wonder about things and to question the world where he has come from. We will learn to see the world from the naive eyes of Heyoo, and finding hope in his transformation and how far he has come.

Sometimes we come across very complicated and sophisticated plots and details in science-fiction, and then we stumble upon a gem like this one, so simple in appearance, but so strong, funny, beautiful and full of hope.

The book is narrated by Rob Dircks himself, and he did a neat job at it. One could think that just because the narration was not done by a professional narrator, that the quality would suffer, but not in this case. I enjoyed the narration and the characters’ impersonation.

As I have said, this has been one of the best books I have listened to this year, and I will recommend it not only to sci-fi enthusiasts, but to anyone who enjoys a good story with great and well developed characters.