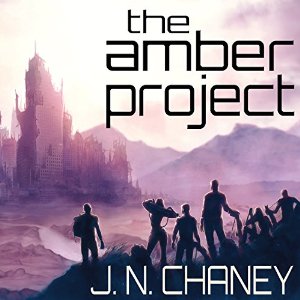 In the year 2157 a gas exterminates almost every living being on Earth, and the few humans who survived seek refuge in the underground, building a city and a political system aimed to the species survival and the genetic engineering  of new human beings, with the right modifications, to be able to survive on the surface and give a future to mankind.

Terry is one of these children, which enter the academy at age seven to not only receive an education, but also to get checked and see which ones of them could make it in the presence of the lethal gas.

The book is divided in two parts. The first part focus on the children’s evolution at the academy and ends with an incident which triggers the second part, when they have to go to the surface and see if they could survive there.

The story is very well paced. I understand that some people did not enjoy the audio logs, but for me it was a great addition to the story, giving us some background and depth. The first part, when the children are still at Terry tries new techniques, I could not help but think about Ender and how he also innovated at the battle school, giving him the victory in many cases.

I spend much time thinking about the origin of the gas and the Jolt, the event which triggered the gas. You cannot just throw a mystery like that at me and be sure that I will not care about it. Where did that gas come from? What was it? I was worried that the author was going to leave us in the darkness, but Terry and his friends will discover what triggered it but not where it came from and what exactly is. The book ends with a cliffhanger that will makes us need to read the next book and maybe know where it came from, so I hope J.N. Chaney will have it ready soon.

Alexander Edward Trefethen’s voice helps to bring the story to life, with very clear diction and an energetic narration,  changing his voice tone depending on the character. The audio production was very good too and listening to this book was a delight, being able to listen to it at a higher speed without losing intelligibility.

I was pleasantly surprised about this book, taking into account that it is his first published work. If you like dystopian books, this one is for you, it will not disappoint.

You can get a free copy of the book at J.N. Chaney’s site.