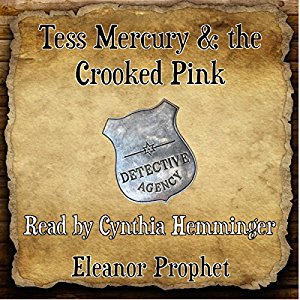 My original Tess Mercury and the Crooked Pink audiobook review and many others can be found at Audiobook Reviewer.

Tess Mercury and her posse are the best bounty hunters of the region. Set in a parallel U.S.A after the civil war, the story has some steampunk elements, but it is essentially a western. The posse has never failed when bounty hunting. In this case the wanted man is a supposed crooked pink, but after some investigations, they are not so sure that he is guilty of what he is accused of, but merely framed by greater powers. They will be involved in a dangerous game clearly out of their league, and there will be even more surprises along the way.

I love westerns, and if they include feminine characters then I am totally sold. At first I was not sure if this was going to be a pure western or a steampunk novel, since the steampunk elements are not introduced from the beginning. I think I would have made it more evident, maybe in the descriptions or as a background information.

The main four characters are archetypes and they are not fully developed, but this did not prevent me from enjoying the story, since this is mainly an adventure book. The story is well built and it is quite entertaining, but the end felt anticlimactic. I was not sure what to think about it, and do not know yet.

About the middle of the book I started noticing tags like ‘I shrugged’ and ‘ I sighed’, and from that moment onwards I was a bit bothered by them, since they appeared very often and it seemed the characters where shrugging and sighing all the time. I understand these tags were introduced to join dialogs and make the narration more fluid, but they appeared just too muc, and at the end I was distracted by it.

Cynthia Hemminger did a good job with Southern accents (I have read that narrating this book was quite a challenge), however the low tone sounded a bit strange for me at first. I was not sure if Tess sounded like an old woman on purpose. I found some inconsistencies with Hazel voice and I perceived ‘swallowing’ noises that were a bit disturbing. In one of the first chapters birds chirping were also audible, and for a moment I was not sure if this was intended. I guess it was not, because it did not happen again. Some audio pauses felt too abrupt, but this is just being very picky.

I enjoyed this book very much, and the accent gave it a just right Southern atmosphere. I would love to read about new adventures of Tess Mercury and her posse.