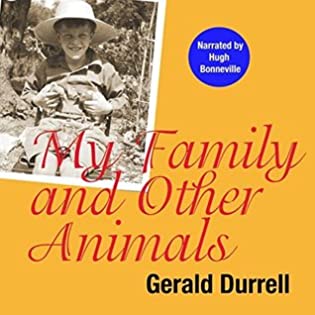 The book is an autobiographical account of five years in the childhood of naturalist Gerald Durrell. The book is divided into three sections, marking the three villas in which the family lived on the island. Apart from Gerald (the youngest) and Larry, the family comprised their widowed mother, the gun-mad Leslie, and diet-obsessed sister Margo together with Roger the dog.
They are fiercely protected by their taxi-driver friend Spiro (Spyros "Americano" Chalikiopoulos) and mentored by the polymath Dr Theodore Stephanides who provides Gerald with his education in natural history. Other human characters, chiefly eccentric, include Gerald's private tutors, the artistic and literary visitors Larry invites to stay, and the local peasants who befriend the family. An audio treat for those young and old.
©1956 Gerald Durrell (P)2010 CSA Word

I have read this book numerous times in English and Spanish (my mother tongue). I also watched the several adaptations that were made for TV, being the one with Brian Blessed my absolute favorite, perhaps because it was my first encounter with Gerry and Corfu when I was a little child. I absolutely love the trilogy, and I have read more books by Gerald Durrell, finding them all absolutely endearing and funny, but the Corfu trilogy has a special place in my heart. I imagined myself being like Gerry when I went with my family to the beach or kept spiders in glass jars at home. This book is a hoot for any child that likes animals, and it is difficult not to feel envious of Gerry’s childhood.

This review is about the audiobook released in 2010 and narrated by Hugh Bonneville. In hindsight, I should have looked harder and listened to the Nigel Davenport version, released in 2016, as Bonneville’s version is abridged and it skips many passages, and even complete chapters like The Rose-Beetle, The Talking Flowers, The Chessboard Fields, and An Entertainment with Animals. To my disappointment, the part in which Margo kisses Saint Spiridioin’s feet is also not included, as well as any mention of Lugaretza, Kralefsky, Kosti, or Dodo, among others. Yanni appears only once.

The spirit of the book is kept though, and Hugh Bonneville delivers a good narration with decent accents and characters’ interpretations. It is just that an abridged version like this one does not make a lot of sense to me. I understand the existence of abridged versions for children, to make the book more easily digested, but this does not seem to be the goal of this version.

Some passages have triggered different emotions from me when reading them this time, probably due to my current vision regarding the protection of the fauna. I am not completely okay with the capture of the “Magenpies” and their posterior exportation, but I get that this may seem a harmless act to a child or to most people at the time.