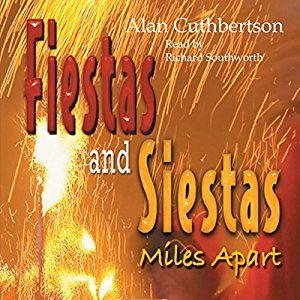 My original Fiestas and Siestas audiobook review and many others can be found at Audiobook Reviewer.

Alan and his wife, a British couple, decide to sell everything and move to Spain. Their two daughters, in the meantime, head towards Australia and New Zealand to spend a whole year down under.

This was a very light listen with hilarious moments, and correctly structured, having the emails from their daughters Ashleigh and Stacy placed in between chapters. Contrary to other books about English speaking people in other countries, this one did not have too many expressions along with their translation, which made it smoother to the listener.

I was very interested in reviewing this book, and see what image of the Spanish people the author would give. Despite being done with great care I have to warn the readers that this book is about a very particular subset of the Spanish population. I agree that if you go to very small villages (some houses did not even have a road but a path leading to them) you will meet people like the one described in the book, but life is very different in towns and large cities. Cuthbertson mentions that Spanish people do not consider animals like family members, and I have to say that it is like this in small villages where people still farm for a living, but not in other environments. Also the myth about Fiestas and Siestas is just not true out of this kind of places. There were also many generalizations, also because of the same reason, just having met a very particular subset of people.

Nevertheless I really enjoyed this book and laughed at many of the anecdotes. I know people from places like the one Cuthbertson describes and I could see similar things happening.

Another aspect is that I did not see a real effort from the couple to learn Spanish for good. They got along with broken Spanish and it is true that they did not really need more, since looking for a job was not part of their plan. It is just that properly learning the language of the country where you live seems a useful way of occupying your time, apart from spending it between bars and fiestas.

Richard Southworth delivered a pleasant narration, and you could very well imagine that you were listening to Alan Cuthbertson himself. He had some issues pronouncing some words in Spanish, which could have also happened to Cuthbertson, so I do not really know how to evaluate this. I would have expected a better pronunciation, but it is also true that many of the sentences in Spanish in the book were incorrect.

This was an enjoyable listen, light and humorous. Just do not expect a very rigorous portrait of the Spanish people.