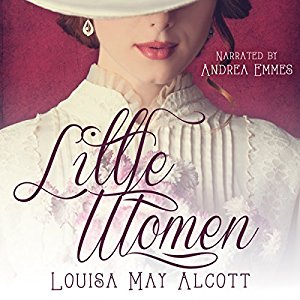 Following the lives of four sisters on a journey out of adolescence, Louisa May Alcott's Little Women explores the difficulties associated with gender roles in a Post-Civil War America.

This is the story of four sisters: Meg, Jo, Beth, and Amy; and how their lives are affected by the time they live in. We witness from the time when they are still teenagers until they reach early adulthood. They will find many setbacks but they will also have great joy, and will learn and work hard to find their place in life.

My first encounter with this story was when I was child. It was an abridged version with illustrations which belonged to my mother and aunts, and was kept at my grandma’s house. I never read the unabridged version, so when Andrea Emmes was looking for reviewers, I could not let pass the opportunity of listening to this great classic.

I was first taken aback by the total duration, more than seventeen hours, but it was worth the listen. The book was first published in 1868, and it reflected the changing society and ways of the time. It is a beautifully written book, and each sentence is a total delight.

The characters are extremely well depicted, and while their talking feels a bit too formal, due to the time when the book was written, they are feel real and fully fleshed. I really cared for them and suffered with them along the way. I think one of the favorite for many people is Jo. I felt extremely moved by her personality, her actions, and the sacrifices she had to endure. All four sisters were very different and each had her own personality. It was like having four new friends and I already miss them.

The rhythm of the story is a bit slow at times, but we have to remember that the writing style of the 19th century was much different from the one nowadays. This kind of literature is meant to be savored slowly, enjoying every word and letting it change you through it.

There is some religious and moral talk in the book. I have to say that I expected more. It is true that it feels quite old fashioned, but Mrs. March’s lectures were quite revolutionary for the time. The only thing that bothered me was how Mr. Bhaer judged Jo about the stories she wrote for newspapers.

This is a very good book, but what made it an excellent experience was the wonderful narration by Andrea Emmes. I did not know her work, but she has become one of my favorite female narrators. She has captured and transmitted the characters emotions, and delivered different voices for all of them. Narrating a book with four main female characters is not an easy task, but Emmes was able to synthesize each sister’s personality and transmit this to the listener with the different colors and nuances.

Despite being the book written and published in the 19th century, I think it still has great value nowadays. While it would appeal to young girls of the time, I think nowadays it would be more appreciated among more seasoned readers, since the writing style is so different from the fast paced rhythm we are used to now. I have to say that I have found it quite soothing and inspiring.