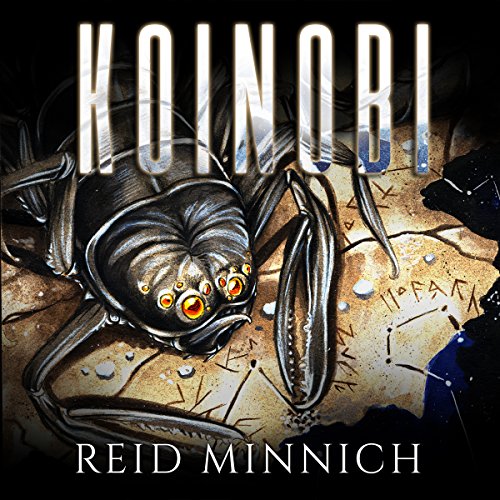 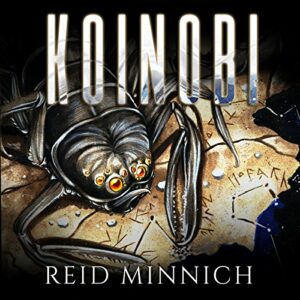 Earth is a forgotten stepping stone between two warring races, the eagle-like Aquilans and the lion-like Pantherans. It was the perfect hiding place for Tweeskzaht, a war weary parasitic insect, until humans sent signals into space. With her adopted home in the crosshairs of both sides, she and her host must enlist a few humans to reach out to her ancient enemy.

The koinobi are a scorpion-like shape parasitic alien species. They provide with great longevity and knowledge to their host, which may turn then into lonely individuals. Mike was already alone all his life, confined to a wheelchair and with no real human contact, when the possibility of hosting a koinobi changes his life forever.

I was looking forward to this audiobook, as I had read several great reviews, and I tend to find weird sci-fi quite appealing, but after a while I realized this book was not for me. The views were just too simplistic, the characters shallow, and the dialogs forced and unnatural. I also did not understand why the characters acted how they did. The world-building was quite naive: there were other planets where the main race was animal-like and they had their own version of humans, but as witless beings, without more intelligence than a herd animal. In many ways, this felt like a children’s book, with too simplistic views, and animal-like aliens. I really struggled to finish it, as I did not feel the urgency of the matter, and I did not care about any of the characters. There was also too much tell instead of show.

Sometimes I find redeeming qualities in the narration of a less than good book, but this was, sadly, not the case. Checking Benjamin Cole’s profile on Audible, I see that this is his first audiobook, and it shows. The first thing that I noticed was how the music he used at the beginning of the book did not fade out cleanly, ending quite abruptly. The narration was okay, but all voices sounded the same, making dialogs difficult to follow. He tried with female voices, but the times they sounded different, they were too forced. It was not consistent. There were several mic noises, not only due to plosives, but as if the recording volume was too high and it was saturating. There were also volume changes and more reverberation, in general, than what is desired.

This was the only time I heard the word “gesture” pronounced with a hard G. It would have been okay, but this word was used many times throughout the book, so I found it distracting.

This book is the first of a series that I will not continue reading and that I won’t recommend.