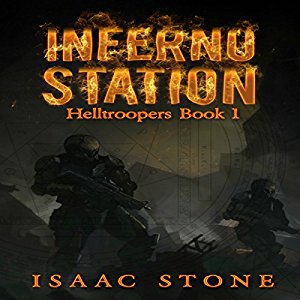 
Ash Wednesday and his crew constitute the Omega Team, a private enterprise hired by corporates as bounty hunters. After rescuing an android by a ship taken by pirates, they are assigned a new mission: finding Simon Haddo and taking him alive. There is an unproportionate bounty for this subject, and Ash fears that hunting him down will be more difficult than usual.

This book is a remake of Dante’s Inferno, a poem written in the 14-century. I always like when the classics are rescued and transformed into sci-fi. I have grown up with ‘Ulysses 31‘, and that may be part of why I like what I do nowadays.

In the prologue the author warns us about the fact that as this is based on and old poem it may not follow the modern structure we are used to in books. With that said, I did not feel that as a detriment of the whole story.

The atmosphere of this book reminded me a lot of shows like ‘Firefly‘ or ‘Dark Matter‘, but this time our main characters were on the right side of the law. For the rest, it seemed quite similar. The crew was formed by seven people, which seemed a bit excessive for a book of this length. We got intros for all characters, but due to the length of the book there was little character developing and evolution. It is a pity, since this would have made it a 5-star book.

Ash and his crew have to go to Inferno Station, where they will have to tread across the different levels like Dante in the original. They find different challenges that make the advancement risky and difficult. I found a couple of these a bit confusing, so I think more accurate descriptions would have been a nice addition.

Persephone Rose’s narration was superb! Narrating a book with seven different characters, an android, and an AI, is not an easy task but Rose has managed to create a different voice and style for each of them. He also transmitted well the character’s emotions and emphasized some parts where it was needed. Rose also used some sound effects to enrich the narration. The introduction and ‘From the author’ had some background music. I do not find this essential but this is just a personal opinion. The only setback I found was two sentences repeated towards the end of the book (3:21:17 and 3:53:18). It is a pity, since without this it would have been a 5-star narration.

Despite being this a relatively short book I have really enjoyed it, and I am ready for the next installments.