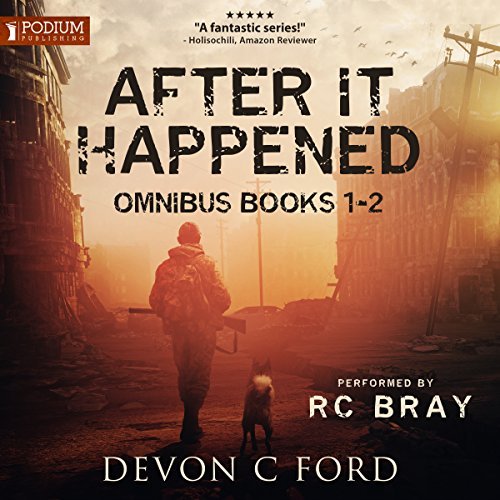 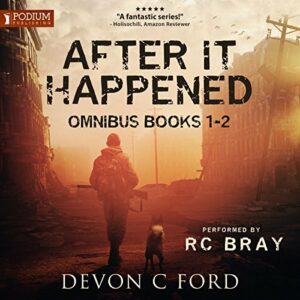 A bundle of parts 1 and 2 of the After it Happened Series.

Set in the UK in the immediate aftermath of a mysterious illness which swept the country and left millions dead, the series follows the trials facing a reluctant hero, Dan, and the group he forms around him. They must battle the elements, find sufficient supplies and equipment to survive, and protect themselves against the most destructive force on the planet: other people.

My original After It Happened audiobook review and many others can be found at Audiobook Reviewer.

Set in the UK in a near future, a pulmonary disease wipes out most of the population, leaving just a few untouched. Some people start gathering with the plan of starting a new society in which everyone should be a valuable member.

I love post-apocalyptic stories, so I was looking forward to listening to this one; and also, it is narrated by R.C. Bray! The premises were good, and the events are the ones expected in almost every post-apocalyptic book. One of the problems was just that one: the lack of originality. There is nothing that we haven’t seen before in other books, movies, or TV shows. This could have perfectly  been part of The Walking Dead. There are no zombies, which counts as a favorable point for me, but there was nothing else that made these books stand out.

I found that there were too many characters in the story. I have read other books with lots of characters, but this one has a never-ending cast. They are all archetypes with absolutely no character development, which prevented me from connecting to them.

The story dragged… a lot. There were some events happening here and there but most of the time the main things that happened were: new people arriving, organizing people, looking for supplies, repeat.

I really wanted to like these series, especially after reading the rave reviews it received, and seeing that there are six books published; but for the life of me, I just didn’t get the point.

R.C. Bray is a great narrator, one my favorites, but I don’t understand the decision of having an American narrator for a book set in the UK, especially since at some points he needs to imitate certain accents from the UK. Sadly there was not enough consistency among them, and the fact that the main narration was done in American accent (but with British terms), completely broke the rhythm of the story, distracting me from the important things. I also have to say that, although Bray performed really well in books like The Martian, his narration of ‘After it Happened’ seemed quite monotone, and the only aspects I can really mention as excellent were the characters’ interpretations and the audio production.