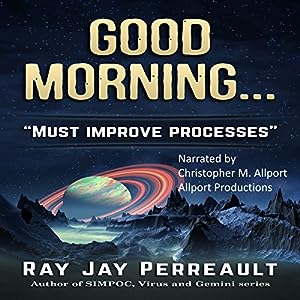 This is the story about the year Robert spends at a methane mine on Saturn’s Titan. His only company is TC,  a computer which assists him in his job and manages communications with other mining sites and the company headquarters. This was not a desirable assignment for Robert to start with, but things start to go even worse when Robert is receiving shipments with missing parts and hearing that other stations are getting his. During the reviews, Robert’s bosses are unhappy about his performance, asking him to be efficient in using the available resources.

Those of us who have worked in big corporations know how frustrating the company procedures can be. Usually communication is not straightforward and most of the time those mentioned procedures are the only thing that keep us from doing our job. Robert’s story is the story of many people but translated to space. I think this makes it very close to us and we can identify ourselves with Robert and how frustrated he becomes.

Christopher M. Allport does a good job at narrating this story, but I would have appreciated a little bit more variation between Robert’s and the computer’s voices.

Ray Jay Perreault is able to tell great short stories, and this is one of those. I would like it to become a longer book, as some of his other stories.