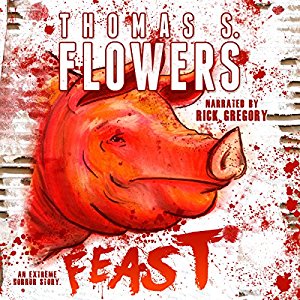 What would you do for family?

Between the rural Texas towns of Bass and Sat is one of the most popular barbecue restaurants in America. Big Butts Bar-B-Que has been the seat of power for the Fleming family since the Great Depression, but when tragedy and scandal beset Titus and his surviving transgender son Lavinia, deals are made to keep control of the restaurant. An arrangement that will put a father at odds with his legacy. As the table is set, is it just the keys to the barbecue kingdom some are after, or something else entirely?

I have received a free copy of this book in audio format from the narrator in exchange for an honest review.

This is the tragic story affecting two families, due to some misunderstandings and somebody prone to breed quarrels. Titus owns a successful restaurant called Big Butts Bar-B-Que. Sadly he has just lost two of his sons, one in killed in war and the other committed suicide after harming and disfiguring Anna, his girlfriend. To make things right for Anna and her mother Tamora, Titus proposes to marry his transexual son Look – Lavinia to Anna. It does not matter what Anna thinks, or the fact that Lavinia disagrees, or that Anna’s brothers have a cunning hate for homosexuals. But this will only bring disgrace.

Knowing that this book is based in ‘Titus Andronicus’ by Shakespeare I was already expecting a gruesome tale, but I have to say that there was even more gore than I expected. The rape scene was one of the crudest I have seen in books, even though, some details were skipped.

The characters were really well portrayed, and their actions and dialogs felt natural. I found strange though, that Lavinia referred to him/herself as ‘him’, and everyone did the same. I would have expected him to address himself as ‘she’, since he changed his name from Look to Lavinia.

There are some plot differences between ‘Titus Andronicus’ and ‘Feast’ but on the whole it is a catchy story with very intense moments and some evil characters. It is difficult to justify Aaron or imagine why he acted like he did, but this part is common with the classic tragedy, and it is key to the whole story.

I really enjoyed Rick Gregory’s narration of this book, impersonating each one of the characters making the story easy to follow. He also captured and transmitted all the emotions from the characters, which made from this a very good experience.

I have a little complaint, though, but I am not partial here. There is a sentence in Spanish in the book, and although it is grammatically correct, nobody would say it like it appears in the book. It is also not read correctly. I am sure this will not be perceived by 95% of listeners but it always bothers me when writers or narrators do not double check this kind of things, especially being so easy nowadays.

All in all it was a very entertaining listen, but stay away from it if you are too impressionable.