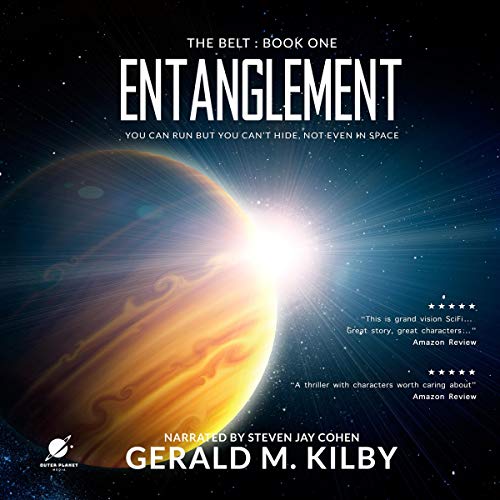 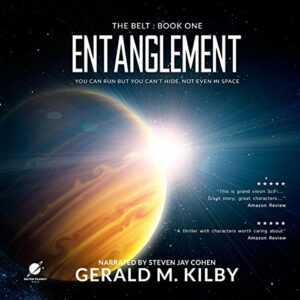 An alternative cover edition for this ASIN can be found here.
**You can run but you can’t hide — not even in space.**
Commander Scott McNabb, of the science vessel Hermes, is three years into a five-year-long survey of the asteroid belt. It’s an excruciatingly dull mission, yet it keeps him far away from his debts and the agencies that are chasing him down.
But his fortunes change, along with the other four crew, when they discover a derelict spaceship in orbit around a binary asteroid. Scott’s share of the salvage bounty would be enough to clear his name and start a new life. All they have to do is retrieve an item of cargo and return it to Ceres.
It should be simple.
However, the cargo happens to be an experimental quantum device lost while en route to Europa, and ownership of this technology could fundamentally change the balance of power within the solar system. Now that word is out of its discovery, the Hermes finds itself being hunted down by those who want to take possession of this device, including the very people Scott has spent so much time and effort hiding from.
And there's not a damn thing he can do about it.
But Scott is getting pretty tired of running away. If he wants any hope of a new life, then he’s going to have to stand up and fight for it, even if that means endangering himself and his crew. Yet, after a lifetime of running and hiding, Scott’s not sure if he has what it takes—maybe he really is just one of life’s perpetual losers. Then again, there is a deep river of rage welling up inside him, born out of a lifetime of countless accumulated injustices, each one inching him ever closer to the edge—and this could be the one that finally makes him snap.
About Entanglement: The story is set a few centuries into the future where humanity has colonized most of the inner solar system. The asteroid belt (The Belt) is now a hive of mining activity and ships ply the trade routes to Earth and Mars. The technology depicted is, for the most part, what I consider to be technically plausible, although I do stretch it a little with quantum entanglement. That said, you won’t need a calculator or a slide-rule to enjoy the story.


The crew of the Hermes has a change of luck when they find a derelict vessel with a valuable and mysterious cargo. Scott McNabb and his four companions are instructed to take this cargo to a specific location but more parties are interested and will fight and even kill for it. The story is set in a distant future in which humanity has conquered the Solar System and AI’s are a part of people’s daily lives.

This space opera has been quite refreshing. It is an action-packed quest with a couple of twists and surprises along the way. I like when characters in a book are more than what they seem at first, and this is the case of captain McNabb. The rest of the characters are not so developed, but they play important roles in the story. There is also the AI of the ship, or more specifically, Quantum Intelligence, a special and evolved kind of AI.

It was a very entertaining story with some original elements that made it unique. I am curious about what they will find in Europa, and how the characters and story will evolve. I’m definitely listening to the rest of the series.

Steven Jay Cohen brought the characters to life with masterful interpretations. I always enjoy Cohen’s narrations, because he knows how to transmit the characters’ feelings, making them matter, and trapping me in the story.