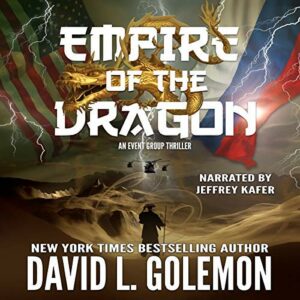 230 B.C. – The first sovereign emperor of China, Qin Shi Huang, has consolidated his ultimate power with battles against the last of the dissenting tribes of China. With one last province to take, he knows he will be pitted against the one man he fears—his mysterious half-brother, Li Zhang, leader of a peaceful province to the north. The new Emperor’s goal was to murder Li Zhang for the secrets he has kept from the world that would give Qin Shi Huang the power to strike beyond the borders of ancient China. The power over earth, water, fire, and air. After a fierce battle by the Great Wall of China, Li Zhang used the powers of Air Bending to escape with his many villages into the expansive and brutal Gobi Desert. There, Li Zhang and his nation will vanish from the histories of not only the First Emperor, but of China itself.

Present Day – The world’s warring governments have simultaneously discovered deposits of an extra-terrestrial ore within the borders of Mongolia. This amazing mineral has been found to have properties that if processed correctly, has the potential to send men far beyond our own solar system using only a fraction of the material as fuel. The age of faster than light travel is now within the world’s grasp.

Enter Department 5656, the secret U.S. Government agency known to only a handful as the Event Group, as they are called upon to join this expedition when it is learned that the recent and brutal nemesis they discovered as having control over a blinded Russian nation, is leading the search for the newest of elements that will send mankind beyond the stars.

Join Colonel Jack Collins, Carl Everett, and Director Niles Compton, and the rest of the Event Group staff, as they attempt to discover the true mystery of what lies beneath the Gobi.

Skies will explode, oceans of sand will rise, and ancient seas from the bowels of the Earth will be called upon to protect the greatest secret in all of China—The legend of Empire of the Dragon.

The Event Group, a secret department within the U.S. Government is sent to China in order to investigate a mysterious extraterrestrial ore that could change the course of aerospace travel, just to discover that the Russians may be ahead, and that there are deeper mysteries in the desert of Gobi.

This was a very entertaining story, with several twists and turns, and some action. I want to clarify that this is the first book I read in the series, so it took me a while to get familiar with the characters, but this didn’t deter me from enjoying the book, in which the past is mixed with the present, and a supernatural power guards the secrets of it all.

Jeffrey Kafer did an excellent job, as always, narrating this book. His compelling tone kept me on the edge of my seat, and his character interpretations created the illusion of having several real people. Kafer is one of my favorite narrators!

Empire of the Dragon is a page-turner that will delight fans of the series. The book can be read as a stand-alone but I believe it will make more sense if you know the backstory.

One response to “Book Review: Empire of the Dragon by David L. Golemon”