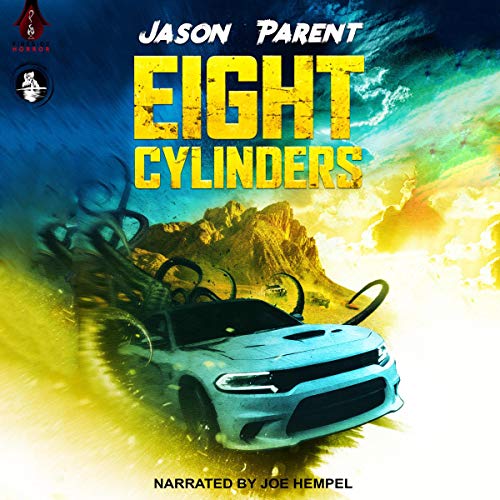 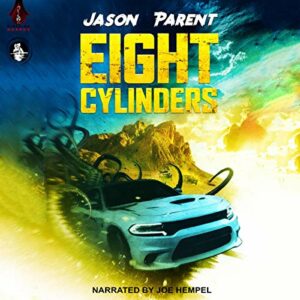 Sebastian “Seb” McAlister has run out of luck in Vegas. Cornered by a trigger-happy gang and shot through the stomach, he makes a desperate escape in his supercharged Hellcat. Fate guides Seb safely out of Sin City and into the desert, but as his wheels fade into the horizon, he fades into darkness.
He awakes among a tiny community in the middle of nowhere. A mountain range circles the hodgepodge of shacks like prison walls looming high. And the warden that resides in those mountains is big, ugly, and deadly—a creature straight out of a Lovecraftian nightmare.
If Seb hopes to escape that wayward way station, he’ll need enough cunning to outwit a force beyond comprehension… and a fast car. With a little luck and a ragtag group of would-be monster mashers racing alongside him, Seb just might have a shot of making it through the mountains alive.

Seb McAllister escapes from the frying pan into the fire when a gang kills his mate and shoots Seb in the Stomach. In the frenzy that follows, he starts driving aimlessly getting far away from his life in Vegas. He wakes up in the middle of the desert where a small community takes him under their wing. Seb can’t understand at first why those people are living there, but he soon discovers that a monster guards the place.

This was quite a ride! I was not sure what to expect at first, but the story develops quite quickly and it grabbed me hard. The book was a mix of strong emotions, cosmic fear, and mysterious characters. I only wish the book were longer! I can totally see this made into a cult movie, with cars, tentacles, loud rock music, and a hardass main actor.

Reading this book makes you question many things, and despite having seen similar topics in other books and movies, I found the way it was told, fresh, honest, and raw. One cannot help but hope for Seb, even though we know he’s been doomed from the start, forever lost in the anterooms of hell.

This was a great story from beginning to end, and Joe Hempel’s narration made it shine even more than it would have been just by itself. Hempel’s narration did not only interfere with the story but added value to it thanks to exquisite character interpretations and a top-notch audio production. Joe Hempel was able to give each character a unique voice and style in a subtle way that it was impossible not to enjoy the storytelling, forgetting that we were listening to a book, and having the feeling of witnessing the fate of real people instead. The magic of audiobook narration by one of the masters.