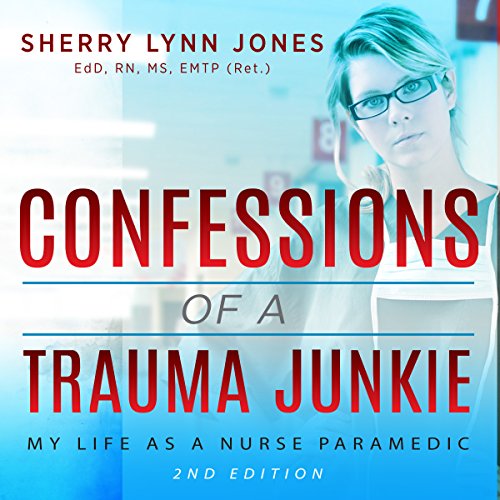 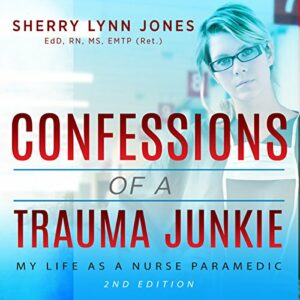 Ride in the back of the ambulance with Sherry Jones Mayo
Share the innermost feelings of emergency services workers as they encounter trauma, tragedy, redemption, and even a little humor. Sherry Lynn Jones has been an Emergency Medical Technician, Emergency Room Nurse, prison healthcare practitioner, and an on-scene critical incident debriefer. Most people who have observed or experienced physical, mental or emotional crisis have single perspectives. This book allows readers to stand on both sides of the gurney; it details a progression from innocence to enlightened caregiver to burnout, glimpsing into each stage personally and professionally.
"Corrections" the third realm of emergency care behind layers of concrete and barbed wire. Join in the dangers, challenges, and truth-is-stranger-than-fiction humor of this updated and revised second edition of Confessions of a Trauma Junkie. In addition to stories from the streets and ERs, medics, nurses, and corrections officers share perceptions and coping skills from the other side of prisons' cuffs and clanging metal door.

I enjoy medical books, and I try to read a couple a year if I can. This one caught my eye and I was looking forward to it. I expected some personal experiences and stories about patients, but the book was not exactly that. It felt more like a collection of stories in the medical field, but without a connecting thread. Some of the stories were from Sherry’s point of view, but some others were not. I was confused a couple of times as I was not sure who the event had happened to. It felt a bit like a bunch of anecdotes in the medical field, and while some were personal, the fact that others happened to other people, even to the point of novelizing some facts that no one could have known how they exactly happened, caused this book to be a bit disjointed. I enjoyed the first third or even half, but the book felt a bit too long for this genre, and I didn’t understand why some of the stories got included in the final mix. Towards the end, the word ‘disgusting’ is used instead of ‘disgusted’. This book would have definitely benefited from a good editor.

Another thing that didn’t sit very well with me was the abuse of acronyms and the consequent explanation of each one. Probably this would have worked better in the printed version and ebook, but it felt awkward in audio. It was a constant rain of acronyms, followed by what they stood for. I would have used the most obvious ones, and maybe substituted the ones that were less popular, or maybe included a glossary. This and the technicalities included in some of the stories made me think the book was aimed at professionals of the medical field, but then other stories were just the opposite, very personal and with little medical content, like the one that included the letter written by her daughter. I think the author could have written two or three different books with this material and get a better-balanced result.

There was too much religion in the stories for me. I appreciated that previous medical reads were more neutral in this aspect, and this is something I missed here.

I am sorry to say that Kristine M. Bowen’s narration was also not my cup of tea. Her narration style did not suit this kind of book, it felt just too matter of fact and perky, even when the events being narrated were heavy or tragic. She often stumbled over the words while reading, and it was quite distracting. There were also some issues with the audio production, like background noises and even music. It didn’t feel very professional.